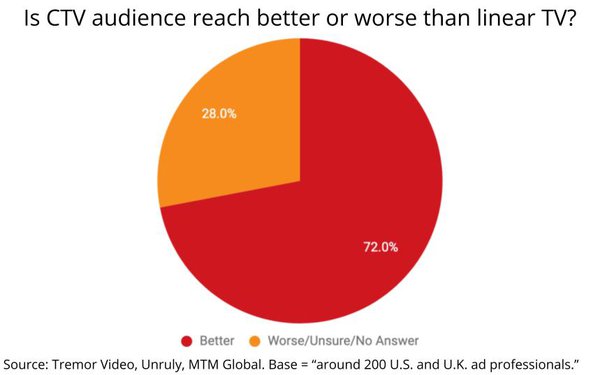 Connected TV (CTV) has been a major beneficiary of the COVID-19 pandemic, and is now perceived as being a better media option for reaching consumers than linear TV, according to advertisers and agencies surveyed by MTM Global for video advertising developer Tremor Video and Unruly.

The research, a U.S. companion study to one released earlier this year in the U.K., is based on in-depth interviews conducted with U.S. brand marketers and media-services agencies in December, found that nearly three-quarters (72%) now deem CTV more effective than linear TV. (The comparable U.K. study found 67% of U.K. ad execs now consider CTV more effective.)

The study cites a variety of reasons for the improvement of CTV's ad industry perceptions, but one of the biggest factors was the impact of the pandemic, which both contributed to rising usage of CTV during various lockdowns, and also gave advertisers and agencies more flexibility for targeting and reaching consumers with their ad campaigns.

More than half (57%) of advertisers and 80% of media agency executives surveyed by MTM concurred that the pandemic has been a major catalyst for CTV overall.

Similar percentages said the result has been that CTV was an even more important media option for achieving their marketing goals during the pandemic. 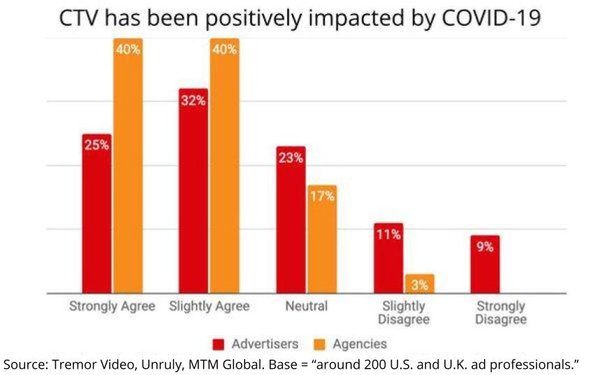