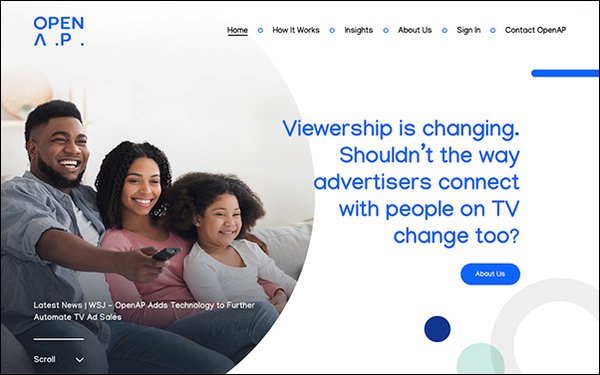 OpenAP, the advanced advertising platform focused on linear TV, is launching its own identifier, called OpenID, to gain data insights on cross-platform media, as well as to compete with big digital advertising players. A number of media agency groups have signed on.

The focus, says OpenAP CEO David Levy, speaking with Television News Daily, is how "you create an audience on the same ID set so you can resolve linear viewership data with digital viewership data.”

OpenAP believes this will lay the groundwork for new cross-platform measurement. The goal is to give more tools to linear-based TV networks to compete with big digital platforms, such as Google and Facebook.

“The platforms are continuing their aggressive efforts toward television providers, and programmers are finally working together in a variety of different ways to combat this,” said Levy. “The ID gives us the setup to start working for cross-platform measurement, cross-platform planning, cross-platform optimization.”

Levy says OpenAP needed a “backbone” data set to help create OpenID. This came from a partnership with TransUnion and Tru Optik, which he says added credit data and CTV data, respectively. “And then we have all the programming data to enhance that.”

Earlier this year, OpenAP started a supply-side platform (SSP) to give advertisers the knowledge of inventory that is available across the different networks.

OpenAP, which started as TV network member consortium, has signed up major media agency holding companies for the ID effort, including Dentsu Media, GroupM, Haworth Marketing + Media, Horizon Media and Omnicom Media Group. They will integrate all advanced TV campaigns as OpenID audiences -- with the promise that OpenID will increase the speed of “audience activation” and “reporting lag.”

With OpenID, advertisers will bring their own targeted audience data resulting in a set of OpenIDs and specific campaign objectives. OpenIDs would then be shared with TV publishers for linear and digital campaigns, where publishers build media plans.

A longer-term goal of OpenID is for audiences to be defined at the ID level, then matched to viewership data and platform IDs for an entire linear, digital and addressable campaign -- all to create a unified, cross-platform OpenID audience.

In addition, OpenAP is now working with The Trade Desk for interoperability between the OpenID and Unified ID 2.0 -- the industry-wide initiative The Trade Desk has been promoting to create an alternative to digital media third-party cookies.