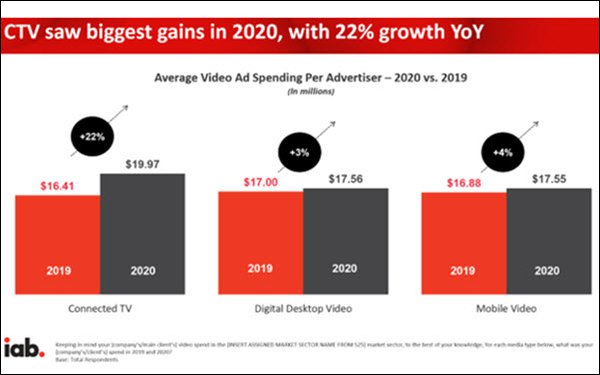 Average annual CTV ad spending per advertiser rose by 22%, from $16.4 million in 2019 to $20 million last year, per the report, based on interviews with 350 marketer and agency executives with decision-making responsibility for video advertising.

For 2021, more than a third of buyers (35%) expect to increase their CTV video spending, and 59% expect it to stay the same. Fully 73% report they have shifted some budget from broadcast and cable TV to CTV. 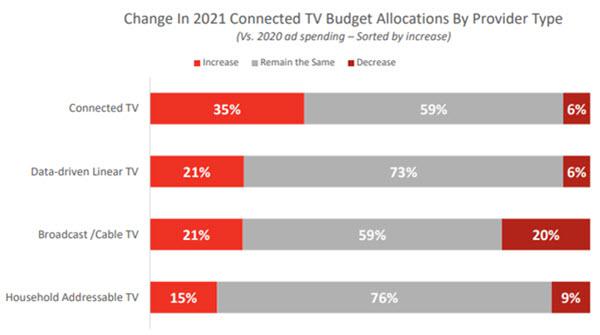 Digital video as a whole is expected to see double-digit growth across all channels this year — and buyers say they will spend 56% of their total video budgets on digital video (desktop, mobile, CTV), significantly surpassing linear TV’s share of 41%. 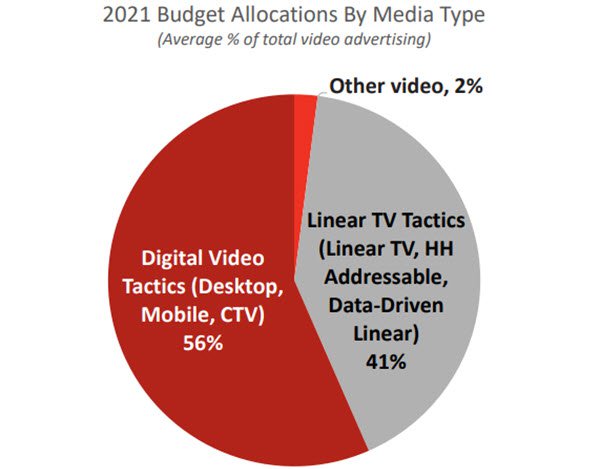 Overall, CTV is expected to command 35% of total digital video budgets — virtually tied with mobile and desktop, with expected shares of 33% and 32%.

“This is a bellwether moment in media that reflects the continued acceleration and shift to digital,” Eric John, vice president of IAB Media Center stated. “While we are seeing growth across all digital video, the movement to more audience-based buying approaches has resulted in increased buyer demand for CTV.”

High-quality content and targeting are cited as key CTV benefits by 61% and 46% of buyers, respectively, and 60% rate CTV highly on providing “a trusted, brand safe environment.”

The survey confirms that CTV’s ability to leverage first-party data — such data is considered important by more than three-quarters of respondents — along with its addressability and incremental reach, have made 2021 a sellers’ market.

Advertisers report that they expect CTV prices to go up in parallel to linear TV prices. Increases in programmatic activation of CTV are also expected to lift prices across the market.

Most video buyers said they would increase CTV spend further if co-viewing were measurable. Other challenges cited include high CPMs in relation to other video platforms, lack of mass reach, and the perception of CTV as “new.”

These video advertising decision-makers also believe that “buyers rooted in traditional concepts of TV delivery and measurement” have slowed adoption of this platform.