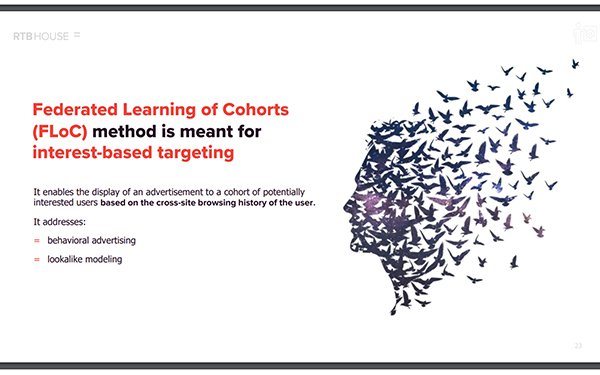 RTB House has been testing Google’s Privacy Sandbox tools, including Federated Learning of Cohorts (FLoC), and didn’t learn about the rollout delay in 2023 until hours before Google announced the change.

“It was quite a surprise, because during the past few months we’ve been very focused on ramping up and creating training materials for sales and internal departments,” said Gary Burtka, vice president of U.S. operations at RTB House, which supports retargeting powered by deep learning. “When you have an opportunity to test, you have an opportunity for refinement.”

Lukasz Wlodarczyk, head of private ads at RTB House, leads a team to spearhead test efforts for the company. He believes that the update is a reaction to the United Kingdom’s Competition and Markets Authority (CMA) engagement.

For the demand-side platform (DSP,) which globally uses Privacy Sandbox’s FLEDGE simulation crafted by the RTB House team in line with the specs published on Github to buy ad impressions for nearly 500 advertisers, the delay creates a “more realistic” timeline.

The tests continue to prove RTB House can successfully target via interest groups.

RTB House has been working since January 2020 to make its platform fully compatible with Privacy Sandbox. As part of this work, the company engaged in discussions with the industry members at the W3C to conduct experiments.

Recently, the company reached a milestone and successfully demonstrated assigning Interest Groups to the users, the bidstream flow, winning impressions, and conversion attribution.

Despite Wlodarczyk’s reluctance to provide specific numbers to demonstrate “success,” he said, “so far we cannot see any substantial differences to the current level of [targeting] in advertising.”

RTB House plans to publish a white paper in the coming months. There are benefits and challenges, just like any other new project.

Challenges include the need to make a new investment, a need for infrastructure reconstruction, high complexity and fragmentation of available solutions, and the enormous operational difficulty in campaign management using multiple cookieless methods.