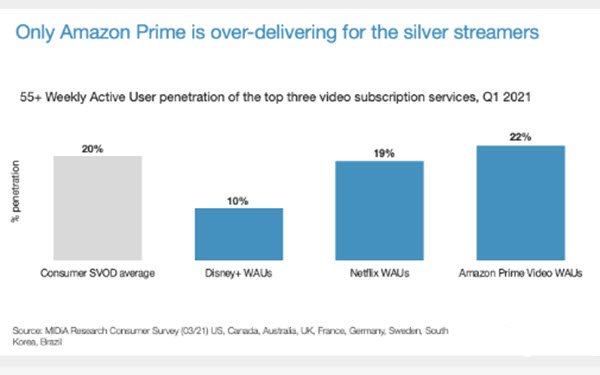 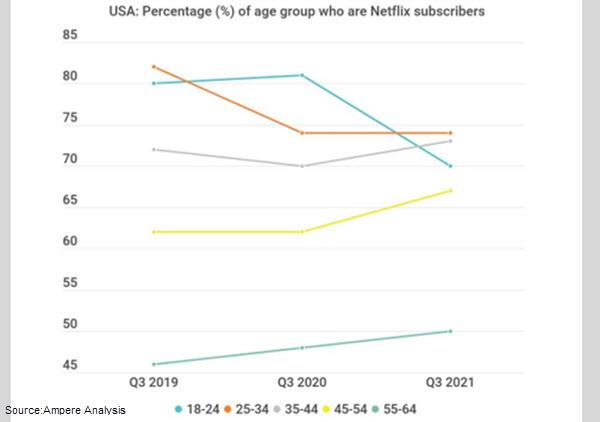 The rise of “the silver streamer” was the single biggest demographic shift in streaming wrought by COVID-19 pandemic lockdowns.

While the 55-plus segment represents just 20% of streamers globally, on average, they are the most engaged age group, according to Midia.

In fact, by Q4 2020, these consumers were the single largest demographic engaging in binge viewing, followed by those 30 to 34.

“The silver streamers matter because they are driving mainstream D2C activity and combining the optimal characteristics to make an ideal streaming subscriber”: plenty of available free time and predictable, sizable discretionary incomes, Midia’s Tim Mulligan wrote in a blog.

“Engaging and retaining this demographic is thus key to the mainstreaming and financial viability of the D2C majors.”

So how are those major players doing on this front?

This is attributable not just to the streaming service’s being available as part of Amazon’s ecommerce ecosystem — a benefit of Prime membership, in particular — but also to its “tradition of delivering a combination of mainstream and nuanced content aimed at older audiences, particularly in indie films and scripted dramas,” observes Mulligan.

Netflix slightly under-indexes the 20% overall average saturation of the 55+ demo, with a WAU average of 19%, while Disney+ is far below both, at 10%.

Many have observed that Disney+’s growth outside of parents and children is likely to be constrained unless it can offer enough adult-oriented content to overcome its youth-centric image.

But Netflix may actually face bigger obstacles to maintaining share of older viewers.

Netflix is unlikely to retain its position as the default streamer for mainstream consumers, and unlikely to attract the 55+ crowd shifting from linear, given that cheaper alternatives offer the sports and news that Netflix lacks, and are "table stakes" for older consumers, Mulligan believes.

“Netflix has the biggest challenge on its hands as world streaming starts to feel the disruptive impact of silver streamers,” and “the longer that Netflix postpones this reckoning, the greater the constraints on its ability to continue to grow its membership,” he argues.

*Importantly, the picture of Netflix's draw among older consumers is significantly different in new Ampere Analysis data for U.S. consumers only as of Q3 2021. (See second chart above.)

According to Ampere, Netflix's saturation among U.S. consumers 55 to 64 has risen to nearly 50% over the past two years, and increased by 22% among all of those 45 and older --although those levels are still well below those for the 25-to-34 and 35-to-44 age groups.

Howver, Ampere also reports that the growth in Netflix saturation among groups under age 45 was just 5% over the past two years, and that Netflix subscriptions are actually on the decline within the 18-to-24 segment, in particular and flat to slightly down among those 25 to 34.

As a result, in the U.S. and some other mature markets, 24–44-year-olds are for the first time now more likely to be Netflix subscribers than their 18-24 year-old peers. Ampere attributes some of this to the youngest adult demo's being the most likely, at least to date, to return to movie theaters for entertainment.

But to me, it also seems highly likely that, given the slew of new free or low-cost streaming services, as well as the opening of concert venues and the ability to engage in all kinds of indoor and outdoor activities again, young adults are now cutting back on some higher-priced SVOD subscription video-on-demand subscriptions.

In addition, the recent growth among the older set in the U.S. shown by Ampere doesn't necessarily negate Mulligan's argument that less costly services that offer the news and sports that seniors crave could be starting to lure some of them away from Netflix.

In any case, it will be interesting to see what happens going forward with both the older and younger demographics vis-a-vis Netflix.

*The Ampere data was released after the column's original posting, and the content has been updated to incorporate it.