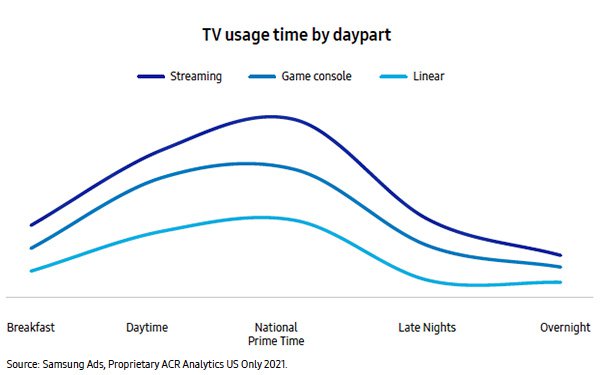 Samsung continues to build a massive advertising ecosystem to support how publishers and brands reach consumers through gaming by creating experiences on the company’s smart televisions and mobile devices.

The number of gamers in the Samsung TV Universe increased significantly in 2021 to nearly 20 million -- up from 16.4 million in 2020. Gamers spent an average of just over two hours per day gaming on their Samsung TVs, according to the company’s data.

“The more opportunities to interact with gaming experiences through our platforms, we will see that as a trend connected to the metaverse in the future,” he said.

“The most surprising piece of data from the report — the rapid pace of adoption of ad supported streaming and gaming on Samsung TVs,” Barrionuevo said. “Gamers spend about 80% of the time with their TVs, but they are unreachable through traditional TV advertising, because they spend more than half of their time on streaming and one-quarter in gaming on our smart TVs.”

The data shows that console gamers grew by 21% in 2022 compared with 2021, and 2020 Xbox Series X and PS5 users spend 61% more time in-game than those with other, earlier generation consoles.

This 84% of gamers consume just 18% of the total linear minutes watched by all gamers in the Samsung Universe, making them virtually impossible to reach through linear.

Linear advertising is more likely to hit a small proportion of gamers — just 16% — who consume more than 80% of the total linear minutes watched by the group.

Barrionuevo said the analysis also looked at dayparting, a pay-per-click ad model in which marketers typically schedule ads for certain times of the day or certain days of the week. In this instance, analysts looked at the time of day consumers were gaming, whether during breakfast, daytime, National Prime Time, Late Night, Overnight, and more.

“We wanted to divide the audience into three key segments and analyze their TV use by day part,” he said. “It helped us to understand their behavior across ad-supported streaming, gaming and linear TV consumption.”

"As budgets shift to connected television through direct or programmatic, our data helps to identify where gamers are across our smart TVs and platforms or ad-supported video apps,” he said.