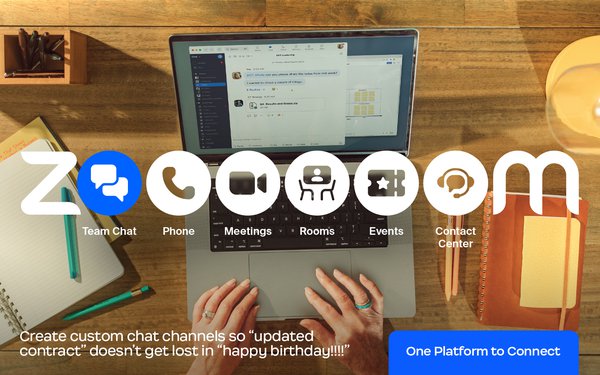 Zoom’s brand campaign launched this week as it tried to grow beyond the pandemic. It didn’t need much help in the past couple of years, as workers and friends took to their phones and computers to connect.

Now, with people going back to the office, and competition growing — as Google Meet, Microsoft Teams, and Facebook all attempt to take meeting into the metaverse — Zoom’s growth may become a bit slower than in the past couple of years.

Ad agency 72andSunny helped to develop the creatives. The ad campaign, which may serve up in the company’s app or on the web while waiting for a meeting, also will run across a variety of digital media including social and streaming, as well as in out-of-home, on billboards.

As part of the branded shift, Zoom has updated its brand colors, typography, product icons, and will kick off a global campaign by introducing a new visual element representing the company’s unified platform.

Zoom is well-known for its logo. The latest image at the center of the campaign replaces the double “O”s in its name with six encircled icons to communicate that Zoom is the platform where connections happen.

Each icon is focused on a Zoom product, such as Team Chat, Phone, Meetings, Rooms, Events, and Content Center.

This campaign focuses on Zoom’s vision for the future: a place where physical and digital merge to create immersive and collaborative experiences.

Chat, which launched today, is prominently featured in Zoom’s new brand look and feel. Team Chat (previously named Zoom Chat) is a powerful hub with chats and channels to connect workstreams, keep projects on track, and stay in touch with your whole team and key stakeholders.

Zoom offers several features, but on Thursday it relaunched its chat feature with a new name, Zoom Team Chat in an effort to emphasize it’s not just for use in video calls. The change is part of the company’s rebranding strategy to convey all the communications problems its services can solve.