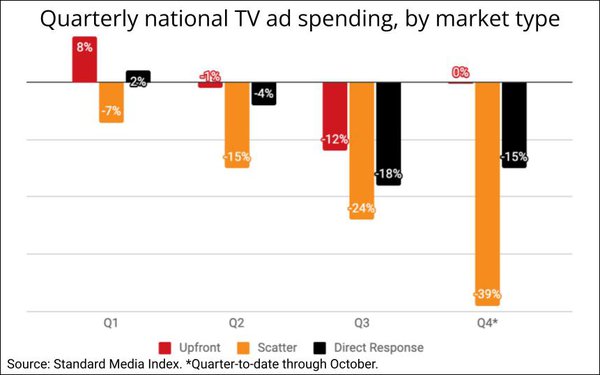 The scatter television advertising market -- the near-term buying of TV media -- is revealing a dramatic national linear TV ad market slowdown in the fourth quarter so far, according to Standard Media Index.

Through October, scatter advertising has dropped 39% versus the same period a year ago. It is also down 56% from 2020.

Overall, including upfront TV buying made this past summer, SMI says there is a 8% drop in national TV advertising to around $4.5 billion compared to a year ago so far. Broadcast TV is down 4%, while cable has declined 12%, and syndication is down 19%.

Economic uncertainty in the U.S. and concerns over a possible recession have caused brand marketers to pull back spending, according to analysts.

Scatter advertising typically totals around 25% to 30% of the $40 billion national TV marketplace.

Upfront TV advertising spending bought this past summer and placed in the fourth quarter, however, has been virtually flat so far -- slipping 0.3%. Direct response advertising is down 15%.

The difference between upfront and scatter market TV placed media in the period is “unprecedented”, says SMI.

Brand advertisers with declines in October include consumer packaged goods, down 4% year-over-year; financial services (off 20%); technology (30%); and entertainment/media (10%).

SMI says the declines in technology and financial services have amounted to around $100 million in media spend each.

Categories that have seen increases in TV spend include: Pharmaceutical (9% higher); general business (11%); and travel (33%).

The slowdown in national linear TV is also 5% below the same period in 2020, the initial pre-pandemic year. 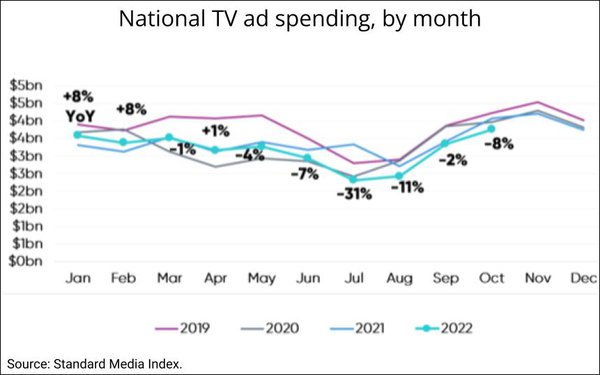