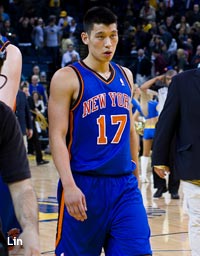 Rumors, innuendo and, of course, sources have been saying for weeks that Jeremy Lin, the New York Knicks point guard, wunderkind, and H-bomb, would be tapped by Volvo to tout the company's cars in China. Well, the rumors were entirely correct, just a bit too narrow.

Lin will tout Volvo in the U.S., too. At Volvo's Chelsea Pier press conference on the partnership Monday, the audience was almost entirely Asian, the press rows packed with fawning women from various Asian and Asian American news outlets and, presumably, the Pacific Rim version of Tiger Beat, judging from the questions ("If you were a Volvo car, which car would you be?" and "Have you found a church yet?" (Though that latter one might have actually been "Have you founded a church yet?")

Maybe it's whimsical, but one hoped to see perhaps a Scandinavian or two in attendance, if only for old time’s sake.  But even though Volvos are still manufactured in Gothenburg and other Swedish locales (and Ghent, Belgium), it's clear where the compass points: China, where Volvo is based, for all practical purposes. To punctuate that was the presence on the dais of Freeman Shen, VP of international operations at parent Shanghai-based Zhejiang Geely Holding. He also serves as SVP Volvo and chairman of Volvo in China.

He said Lin will be Volvo's brand ambassador to reach younger people interested in luxury cars. The company will wrap a message around Lin that Volvo is more youthful, active and dynamic, and a progressive luxury car, he said.

Also present were two Americans, John Maloney, president and CEO of Volvo Cars North America, and Richard Monturo, VP global marketing, sales, and customer service.  Maloney said Lin would be used in U.S. marketing and promotional messages starting this year. "[Lin] has become a global cultural phenomenon. He really embodies the best of the human spirit, optimism, humor, commitment and compassion. He is an excellent fit for Volvo."

Monturo said Volvo's deal with Lin is for two years, with the first commercials leveraging Lin likely to come out this summer. Lin commented that his family was involved in his decision to pitch Volvo, and Monturo added that the family will also likely be involved in some way in the ads. It's worth noting that Lin is pretty savvy at viral media, with a popular YouTube channel that he populates with self-made videos. "We will use his humor and his ability to tell stories," said Monturo. "We intend for it to be a collaborative co-creative relationship, working with him and his family at the concept and production stage."

Monturo added that the company won't use him for specific vehicles but for the entire lineup. "We have models that are fun and youthful, dynamic and sporty, rugged and strong. When you see his versatility on and off the court, there is a lot we can do to tell different aspects of our brand story coupled with aspects of his own story."

Lin guaranteed there would be no "Linsanity" ads (though one imagines some dealer will run promotional Tier III ads to the effect that the deals are "absolutely Linsane".)

"The thing that attracts us to him are his qualities as a person. It's terrific what he's doing on the court, but he is also the first NBA player in 57 years with a Harvard degree, and he's the most-searched athlete in China," said Maloney. "It's this star power and personality which is the reason we wanted to partner with him and tell the story."