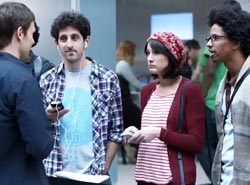 Apple may still be the dominant smartphone brand, but thanks to aggressive marketing and wider availability (particularly in the prepaid sector), Samsung is pulling awfully close in terms of market share, meaning there may be more head-to-head marketing battles between the two brands in the future.

“Samsung has grown to take up a larger and larger percentage of Android handset sales,” Ross Rubin, director of industry analysis at NPD, tells Marketing Daily. “They’ve had very successful launches with the Galaxy S line, and on the back of that the company is becoming more aggressive in developing its own [technology] ecosystem.”

One significant factor in Samsung’s success is the availability of its phones in the prepaid arena, where there’s no competition from Apple, and fewer models from other makers are available either, Rubin says. Phones running the Android operating system (which is the system Samsung uses), accounted for 79% of the smartphones sold in the prepaid market during the first quarter. Of them, 38% were manufactured by Samsung.

“Historically, we had not seen prepaid phones account for a large percentage of the smartphone market, but as more Android handsets have become available, customers have increasingly adopted them,” Rubin says. “Samsung’s broad carrier support and advertising –- particularly in the ascendant prepaid segment -- have helped it achieve the highest market share among Android handset providers in the U.S.”

That dominance will likely lead to more Samsung and Apple showdowns (such as the commercial Samsung ran earlier this year that openly mocked people lining up outside Apple stores awaiting the latest phone release) in the future, Rubin says.

“While at an operating system level [Apple] continues to complete [with all Android phones], to the extent that Samsung becomes a more dominant smartphone provider, there will be more direct competition between them,” he says.