Trailerpop: Let You Entertain You 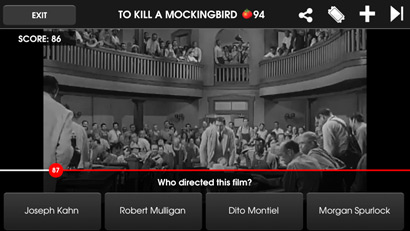 As marketers look away from standard advertising techniques for engaging audiences, the search is on for making marketing content a source of real entertainment rather than interruption. This is harder than it sounds, as decades of terrible branded video games and unseen Webisodic series have shown. The film industry should have an easier time of it, given that almost everyone loves their marketing materials pretty much out of the box. The movie trailer is itself addictive, as my wife often complains when I spend hours poring over trailers on our Apple TV.

“This is entertainment for you, then?” she asks snidely.

Well, almost entertainment. The folks at Trallerpop this week launched a long-planned app and social media platform that gamifies trailer watching. It is really fun.

The app lets you explore a beautifully designed wall of tiled themes, celebs, and even celebrity-picked lists of films whose trailers are turned into trivia contests. You launch a theme and while the trailer of films old and new run, a trivia game related to the content runs beneath. The player accrues points that can be redeemed for movie tickets and merchandise.

Trailerpop’s team is led by Jon Vlassopulos, CEO, who also was behind the original Zippo lighter app that was the first big branded app hit of the early iPhone days. Jon V briefed me on this idea many months ago, but crafting compelling content and getting all of the necessary rights and partnerships in place for such a venture is no easy lift. This is a very ambitious project, involving integration with Fandango, iTunes, Google Play, Vudu and Amazon, because the app is also designed for media discovery. In the process of playing you are being exposed to films you never knew you wanted to see, and many you forgot how much you loved.

In addition to being technically elegant in execution, the app is also polished with celebrity partnerships, with film lists attributed to the likes of Deepak Chopra, Amy Smart and more.

On the marketing side, the pathways to integration are countless, and the company says it has already secured marketing commitments from major studios.

Of course, the question in the end will be one of scale, whether any gamification of this sort can get traction with enough users to make the heavy lift of content creation at work here worthwhile to Trailerpop and the reach sufficient for marketers.

But as an exercise in next-generation marketing as mobile experience, it is among the most advanced, polished and engaging I have seen.

But then again, I am the sort of movieholic the app targets.

To quote from "Jerry Maguire," it had me at hello.