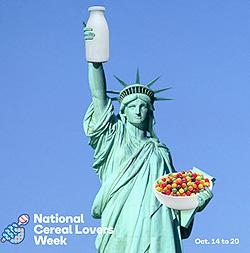 The underlying strategic goal is, of course, to encourage cereal consumption.

Cold cereal is still the number one choice for breakfast in the U.S., consumed by 92% of households (per Mintel), with sales topping $9 billion over the last year (per Nielsen). The ready-to-eat U.S. cereal market as a whole has $10 billion in annual sales — of which General Mills has a 40% share.

However, boxed cereals have seen flat sales and declining volumes over the past decade, according to a recent report by Rabobank on U.S. cereal trends, which attributes this primarily to a shift toward the wide variety of other convenient breakfast choices available today.

"Americans still love cereal, but the reality is that there are a lot more breakfast choices out there now," says Pam Kermisch, director of communications for the Hello, Cereal Lovers initiative. "So we need to bring the sexy back to cereal. We need to remind people how awesome it is and how much they love it, and get it out of the pantry and into breakfast bowls — and also encourage people's growing tendency to eat cereal for other meals and snacks. Frankly, we haven't talked about [non-breakfast consumption occasions] up to now."

"We're very open to sharing and curating news and discussions regardless of the brand, because what's important is what cereal fans themselves want to talk about, the hot topics," she says. "At the end of the day, if we can encourage people's passion and excitement about cereal, all parties will benefit, including General Mills."

The Hello, Cereal Lovers campaign has a strong focus on driving engagement and interaction with consumers through sharing of cereal-based recipes, ideas, news  and crafts activities sharing on its dedicated Web site and Facebook, Twitter, Pinterest, Instagram and Tumblr presences. (Those were developed by McCann Always On, and content/posting/tweeting on a daily basis is handled by a General Mills community manager, reports Kermisch.)

But General Mills is also reaching out to less digitally oriented consumers, and driving awareness of the online/social elements, through traditional media.

That integrated approach will be apparent during National Cereal Lovers Week.

Justin Warner, known as a winning contestant on Food Network's "Food Network Star" program and chef/co-owner of Brooklyn's Do or Dine restaurant, will be whipping up cereal-inspired dishes (his recipes include Cocoa Puffs Carbonara and a Fizzy Trix cocktail) on Oct. 19, during the New York City Wine & Food Festival; hosting a Google "hangout"; making media appearances; and starring in campaign videos.

(General Mills, a sponsor of the festival, which runs Oct. 17-20, will also have an exhibit featuring retro cereal artwork/imagery, fashion inspired by famous faces and brands in cereal history, and cereal art and interactive exhibits.)

In a paid integration, the hosts of ABC's "The Chew" will do a segment on Oct. 15 on cereal recipes, and mention National Cereal Lovers Week.

Cereal recipes from celebrity chefs Amanda Freitag, Elizabeth Falkner, Nate Appleman, Dale Talde and Harold Dieterle will be featured on Serious Eats starting next week. General Mills and Serious Eats have also partnered on a "Battle Outside the Bowl" sweepstakes (going live on Oct. 14). Cereal fans who submit their outside-the-bowl cereal recipes/ideas and photos will earn chances to win prizes including a case of a variety of General Mills cereals, and $1,000 for use toward cooking equipment.

General Mills will also run sponsored radio giveaways/trivia contests throughout the week, with a different theme each day.

In addition to leveraging its own social communities to drive consumer awareness and engagement with (and media coverage of) the week's activities, General Mills will employ banner ads and paid social and video elements, reports Kermisch.

The timing of the week-long promotion should also help drive buzz and sales for General Mills's limited-time Halloween revival of brands no longer marketed on an ongoing basis, like Count Chocula, Franken Berry and Boo Berry, as well as long-discontinued brands Yummy Mummy and Frute Brute.

Still, as of the third week in July, the campaign's Facebook page already had some 313,000 "likes," and that number has since grown to more than 440,500.  Its Twitter page currently shows more than 4,600 followers.

"We put a lot of stock in the growth of our online communities, but we're also very focused on engagement levels," says Kermisch, adding that "the members of our communities are very engaged and active in sharing ideas and comments."

Learning from the consumer-generated ideas and comments is also a major benefit of the campaign for General Mills, she says, noting that the idea for National Cereal Lovers Week emerged from their input.

With high-sugar kids' cereals, along with other sugary foods and beverages, under fire as a result of growing concern about the obesity crisis and nutrition issues, the campaign also provides a platform to get out messages about cereal makers' efforts to improve kids' cereals nutritional profiles. (General Mills brands have reduced sugar levels by 16% since 2007, and many brands have increased whole-grain content and added vitamins and minerals, but nutrition advocates including The Center for Science in the Public Interest still say many kids' cereals have far too high sugar levels.)

As for sales, the Hello, Cereal Lovers campaign is obviously just one, new element in General Mills's huge marketing and overall strategies. However, recent trends are positive. In September, the company reported that net sales for its Big G U.S. cereals business grew 4% in its first fiscal quarter, and that the business also gained market share.