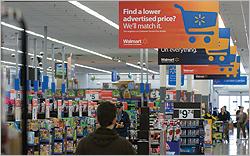 The world's largest retailer is vowing to have its loudest fourth quarter ever, with Walmart promising investors that its marketing share of voice will be 50% greater than its nearest competitors every single week of the coming holiday season.

The retailing giant also unveiled plans to think littler, as it shifts its expansion focus to smaller-format stores within the U.S.

In remarks made at its annual Investor Day, which was also webcast, the Bentonville, Ark.-based company says it is planning its biggest Black Friday event ever. In addition to aggressive promotional pricing and rollbacks, says Bill Simon, president of Walmart U.S., Walmart plans to create some 25 billion marketing impressions, with a campaign that includes TV, print, radio, search and social. Additionally, promotional tie-ins will include the NFL, Duck Dynasty and the Latin Grammys.

Faced with an unexpected dip in domestic same-store sales in the last quarter, the company says it is rethinking its balance of store sizes and formats. That means scaling back expansion plans for its largest Supercenters, and instead focusing on growth through smaller format Neighborhood Market Stores, with more than 400 set to open, and its still-fledgling Walmart Express. (It says that format has seen double-digit increases in comparable stores in its test markets.)

As it evaluates each market as an ecosystem, it says it will experiment with using some of its larger supercenters as distribution centers for smaller stores that are nearby, a strategy that could potentially lower costs. Simon tells investors that the plan is in test now, and is scheduled to roll out in the first of three unnamed markets in March.

“While supercenters remain our primary format for Walmart U.S., Neighborhood Markets and Express stores -- combined with e-commerce -- will be an even bigger focus in helping us drive growth,” Mike Duke, president and CEO of Walmart Stores, says in his remarks.

He also singled out the company's progress in its e-commerce operations as key to its future success: “The biggest opportunity we have is winning the intersection between physical and digital retail around the world.” He says in the first half, e-commerce grew 30% globally, compared to the same period a year ago, including a strong performance in China.

With the holidays right around the corner, “we're in a tough and unpredictable global economy,” he concedes. “The competition is also tough. But we're prepared to win in any environment.”