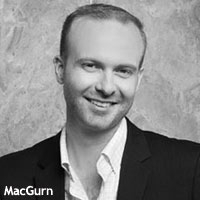 Some may remember Verizon and other telecommunications companies rolling out platforms several years ago that repurpose television advertisements to serve up on publisher sites for mobile or desktop. Brands just needed to provide the content and the platforms would do the rest -- sort of like responsive design where the Web site adapts to the screen on the device. Now Jeff MacGurn, Covario VP of earned media and SEO, believes the industry will move toward the same type of concept for content.

Responsive content will become more important with wearable technology such as watches and Google Glass. The future of search means the loss of ranking for pages and Web sites. There's no second page in terms of ranking. It has linguistic cues vs. written cues. And the Knowledge Graph becomes more important. Viewers see a lot less information.

MacGurn spoke about responsive content to a roomful of brands at the InflectionPoint 2014 conference Wednesday in San Diego. Think of the concept as a cross between responsive Web design and personalized Web page content on everything from a publisher's site to retail Web site.

Rather than developing separate content for search, social and mobile, marketers need to start developing content based on responsive design, and technology providers need to start thinking about building platforms that repurpose the content -- not just the ads. This would allow brands to begin serving content that responds to the device on which the consumer views it, rather than having to build a million pieces of content for specific devices.

Splintering makes responsive content critical, and makes the companies willing to step up and develop the platform valuable. "We need to go beyond responsive design and look at responsive content, where the content gets repurposed for the specific device," MacGurn said --  whether text, audio, video or still images. "Browsing isn't efficient on a wearable device."

Google's local carousel -- a stream of horizontal images each one representing a specific page -- would work well on wearable devices such as Glass and the concept of responsive content. It's one type of format that would respond well to multiple types of devices, although it's mostly available on desktop and tablet today. It's most likely to appear for queries representing user interaction like photo uploads or comments. The carousel serves- p about 30% more business listings in 40% less space, per MacGurn. "There's really no change in ranking, from the first position on the carousel to the 10th," he said.

The carousel, which links to Google Maps, provides different filter perimeters with various queries. Someone searching for pizza recipes will see a list of ingredients, and baking time. There's practically no correlation between ranking well in Google search pages and in the carousel.

Image and content don't matter as much as the context, per MacGurn. For example, a post with an image of a shiny new bike you just bought remain less impactful compared with it being the last shiny new bike you will ride from northern California to southern before going into the hospital for cancer treatment.