iHeartMedia Revs Up Across All Sectors 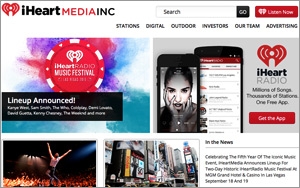 Excluding the impact of foreign currency fluctuations, iHeartMedia’s total revenues increased 2% to $1.7 billion in the second quarter of the year, the company announced this week.

The company attributed this to increases in local and national ad spending, plus its traffic and weather business, and revenue from syndication and events.

When currency fluctuations are excluded, the Americas Outdoor division, which includes iHeartMedia’s U.S. and Latin American business, saw total revenues edge up less than 1% from $344 million to $346 million. However, when the currency changes are taken into account total revenues actually fell 1% to $341 million.

iHeartMedia pointed to the expansion of its digital billboard network in the U.S. as a key driver of revenue growth at home.

Exchange rate swings had an even bigger impact on the International Outdoor business, causing total revenues as reported to fall 13% from $437 million to $382 million, chiefly reflecting declines in the euro and other foreign currencies. When these changes are excluded, however, revenues rose 2% to $446 million.

Although the bottom line figures are positive for iHeartMedia, questions remain about its ability to service the mountain of debt it still carries from the deal to take the company (previously Clear Channel) private back in 2007.

Looking ahead, the company is on the hook for interest payments totaling $862 million due by the end of this year, plus maturities payments of $196 million in 2016 and $934 million in 2018.