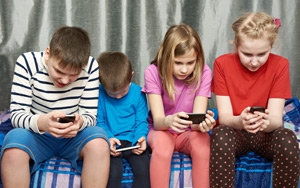 Parents are creating a digital divide between young boys and girls, new research suggests. American moms and dads are 30% more likely to let their sons choose their own apps, according to new findings from PlayScience and the Casual Games Association.

This preferential treatment also extends to app purchases, as parents are 13% more likely to buy an app for their son, the research finds. Also, parents are more likely -- by about 9% -- to value apps focusing on academic skills for their girls than their boys.

When kids are allowed to choose their own apps, they appear to be breaking with preconceived preferences, Bryant noted.

“For example, in this study we also found that girls are 30% more likely to prefer apps that make them laugh, debunking the common assumption that boys prefer humor,” Bryant said.

Between sexes, the distinction between learning and entertainment seems to blur among the youngest users. “For mobile apps, the lines between playing and learning for younger kids are blurred or don’t exist,” Bryant said.

More broadly, nearly half of kids ages 6-to-14 play with their favorite app every day -- and 85% do so at least several times a week – the research shows.

Mobile marketers will also be interested to learn that kids prefer tablets over smartphones by nearly 2-to-1 for the purposes of play.