Half Of Adland Workers Dissatisfied With Their Jobs 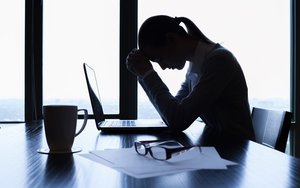 There appears to be a mid-career dip in morale: Respondents making between $101,000 and $250,000 are more likely to have low morale than high. Those who have been in the industry less than five years were twice as likely to say they have high morale than low; the same is true of those making less than $50,000 a year.

The cause of their unhappiness remains consistent with last year's results. Workers overwhelmingly say "company leadership" is the top factor contributing to their dissatisfaction (73%). More than half of those with low morale (58%) rated the leadership at their company as “inadequate,” while only 3% rated it as “exceptional.”

Unhappy workers are attempting to make some changes with 63% saying they are actively job hunting.

While unhappy workers express their frustrations toward the executive suite, employees with high morale, on the other hand, claim very different causes for their mood. Those who rated their morale as “satisfactory” (22%), “good” (20%) or “excellent” (12%) most often cite “work/life balance” (62%) as the prime reason. “Satisfaction with work” is second with 49% and “creative freedom” is third with 44%. Those rankings closely mirror 2015’s findings, when “work/life balance” was also named the leading cause of high morale.

There is no correlation between gender and morale. Black or Hispanic employees are slightly more likely to have low morale than high, although the respondents were so overwhelmingly white — about 85% — that the remaining sample size is too small for meaningful analysis, says Campaign.

“Conversations with people at all levels of the industry reveal widespread frustration and even despondence about the industry and their own jobs," stated Douglas Quenqua, editor in chief, Campaign US. "But seeing the numbers really crystallizes how serious an issue this is for advertising, particularly as it fights with other industries for tech and creative talent.”

Some 61% of respondents worked for a creative agency, 13% for a brand and another 13% for a media agency. The rest were split between social platforms, publishers and freelancers. The survey, which received 294 responses, was conducted online during the month of September 2016.

advertising, agency, employment, study
1 comment about "Half Of Adland Workers Dissatisfied With Their Jobs".
Check to receive email when comments are posted.
Next story loading