New Bud Packaging Features Names Of States With Its Breweries 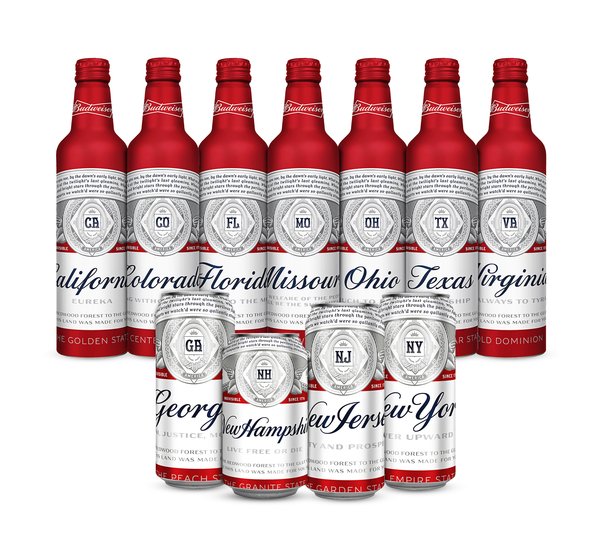 Budweiser is out with another on-packaging promotion.

Today, the Anheuser-Busch brand is unveiling 11 versions of cans and bottles, each bearing the name of a state with a Budweiser brewery (or in California’s case, two breweries) in place of the Budweiser logo.

The promotion, part of Bud’s “Proudly Brewed Across America” campaign, follows the reintroduction of its popular “America” can for the second consecutive summer. That effort is backed by ads featuring country music star Thomas Rhett (Bud is sponsoring his current tour) and user-generated content. Bud has been offering various patriotic packaging themes each summer since 2011.

The state-specific cans and bottles will be sold only in their respective markets, through September. In addition to California, those states are Colorado, Florida, Georgia, Missouri, New Hampshire, New Jersey, New York, Ohio, Texas and Virginia.

On the limited-time packaging, “King of Beers” also has been replaced with individual states’ mottoes, “Anheuser-Busch Inc.” has been replaced with each state’s nickname, and the center medallion “AB” monogram includes each state’s initials.
The summer campaign also includes open houses to be held at the breweries, featuring local music, food, custom merchandise and appearances by the Budweiser Clydesdales. In addition, the brand’s first “Budland” festival will be held in Los Angeles, offering local music, food and fashion.

Bud is encouraging consumers to sign up for the brewery open houses through a dedicated area of its site.

In late May, Bud released a “Proudly Brewed Across America”  ad/video saluting the 12 cities that host its breweries.