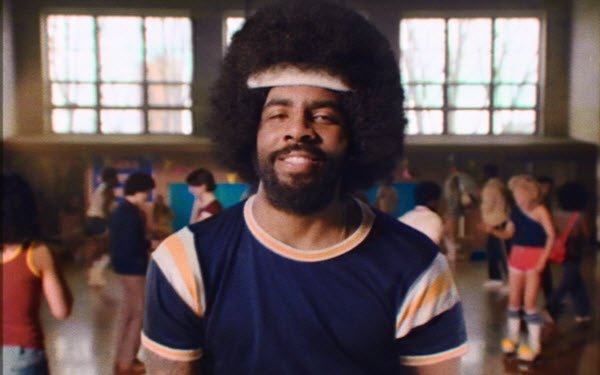 The 30-second ad, now on YouTube (below), features NBA star Kyrie Irving as Uncle Drew, a senior who relishes showing up younger players at the local basketball court.

The character, conceived for Pepsi by agency Davie Brown Entertainment, has become a beloved phenomenon among fans since 2012, when the first in a series of Uncle Drew ads launched. That first ad, “Chapter 1,” has since pulled more than 52 million views.

The wildly popular storytelling ads — written and directed by Irving, with appearances by the likes of NBA All-Star Kevin Love and Hall of Famer Bill Russell — drew the attention of producers Marty Bowen and John Fischer of Temple Hill Entertainment. They pitched Pepsi on the idea of turning Uncle Drew into a feature film.

As The New York Times recently reported, Pepsi, excited about the novel idea’s potential for connecting the brand with new audiences, agreed to pay for a screenplay by “Skiptrace” writer Jay Longino. Lionsgate Summit Entertainment signed to distribute the movie.

“Nobody has done [this] before, but I would venture to take a guess that this won’t be the last time,” observed Lou Arbetter, general manager of Pepsi Productions, which is producing the flick in association with Temple Hill.

The comedy — set to premiere on June 29 — has Uncle Drew being recruited by a player who’s lost his life savings (played by Lil Rel Howery) to enter a team in the Rucker Classic street ball tournament in Harlem. The two embark on a road trip to round up Uncle Drew’s old basketball squad: Shaquille O’Neal, Chris Webber, Reggie Miller, Nate Robinson, and Lisa Leslie.

The Times reports that the brand promotion within the movie is restrained: The opening credits say the film was made “in association with Pepsi”; the Rucker Park scenes “show various iterations of the brand logo surrounding the court”; and the villain (a rival coach) “gives a shout-out to Pepsi during an interview with ESPN.”

Pepsi and partners have previously released an official trailer.

The new ad doesn’t feature actual movie clips, and has Irving straightforwardly pitching Pepsi (“Nothing works up my thirst for an ice-cold Pepsi like getting buckets”), and drinking from its limited-time retro-design can.

But the ad also closely ties to the movie’s premise, showing Irving shooting hoops across several different decades, in period-appropriate garb — and ultimately leading up to him in his Uncle Drew persona, followed by a promotion for the movie’s premiere.