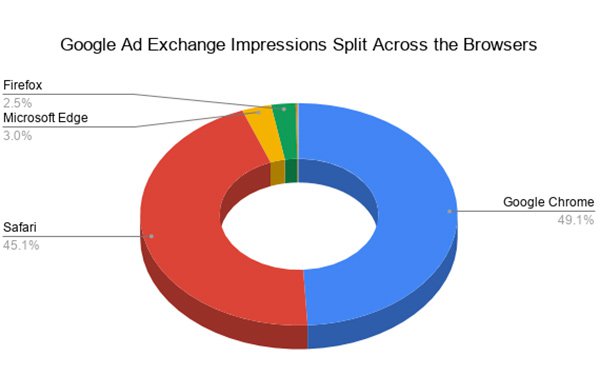 Technology companies are scrambling to find ways to run targeted ads without using third-party cookies, as the clock ticks down on when Google will phase out support in its Chrome browser.

For some, the COVID-19 pandemic has meant that progress for this topic is placed on hold. Others continue to move forward.

Rasheed Ahamed, inbound marketer at Automatad, released a study on Tuesday that focuses on helping marketers understand Google Ad Exchange's performance across browsers such as Chrome, Safari, and Firefox, as well as detail how Google Ad Exchange performs in cookie and cookieless environments

Automated analysts studied the performance of Ad Exchange across the browsers in different geographic areas including the United States, the United Kingdom, India, and Germany.

Based on specific geographic areas, the report is intended to inform publishers about what it means for them.

Google Ad Exchange eCPMs vary from one browser to another, and impressions are split. In the United States, Safari market share is higher than the other markets, as almost one out of two smartphone users own an iPhone. Chrome gets half of the impressions and Safari has 45%. The remainder are split between the other browsers.

Although Safari took 45% of the available ad impressions, it accounted for just 25% of the total revenue. On the other hand, Google Chrome accounted for nearly 70% of the revenue, according to the data.

Ahamed believes this is because the Google Ad Exchange eCPM of the impressions in Chrome is about 150% higher than that of impressions in Safari. The eCPM from the browsers that don’t allow third-party cookies by default such as Safari and Firefox are at more or less the same value.

In the United Kingdom, Chrome accounts for 56% of the total impressions brought by Google Ad Exchange and Safari accounts for about 37%.

Safari’s share in revenue fell to 20%, while Chrome increased share to 72.3%. The difference between the eCPM values is greater. Microsoft Edge is at 4.3% and Firefox is at 2.3%.

During the analysis, Google at 64.1% did not take the complete market in Germany. Safari, Firefox, and other browsers accounted for about 35% of the impressions, while Opera took 0.8%, Microsoft Edge took 3.4%, Firefox took 9.7%, and Safari took 21.6%.

In India that the data looks quite different.

Google Chrome has the lion’s share of India’s browser market.

Google Ad Exchange captured more than 90% of the impressions and the revenue via Chrome. The percentage of revenue from all the other browsers are in the single digits, except for Safari and Firefox. Other browsers didn’t contribute more than 1%.