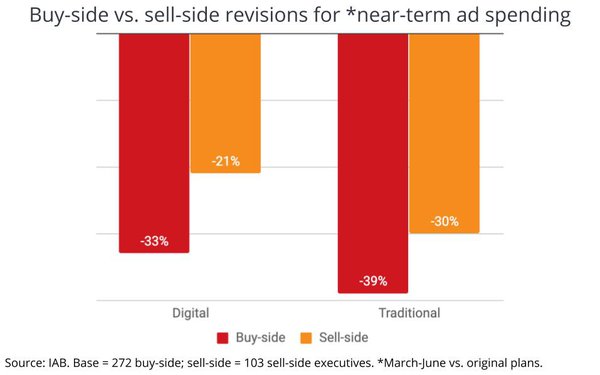 COVID-19 continues to hit the advertising industry hard. Seven out of 10 publishers say they are in the process of re-forecasting revenue, with 98% expecting revenue to decline this year.

The study -- Coronavirus: Ad Revenue Impact On Publishers & Other Sellers -- released Wednesday morning by the Interactive Advertising Bureau and fielded between April 1 and April 7. It shows that digital ad revenues for the near-term -- March through June -- are projected to fall between 19% and 25%, depending on the channel, vs. their original plans. Linear TV revenue is now projected to be down 27% and print ad revenue is down 32% from their original plans.

The data shows a disparity between news and non-news audiences. Site visitors to news sites continue to rise -- more than 30%, according to ComScore, but it’s not translating into revenue for publishers. The revenue is being disproportionately affected by campaign pauses, cancellations, new plans, and blacklisting.

“The knee-jerk reaction of the industry is to apply the brakes, access the situation and re-plan,” said David Cohen, IAB president. “They didn’t have the correct things to say. This is not a buy-now message time.”

Programmatic specialists -- those that are flexible and ready to optimize media messages -- seem to be faring better than overall publishers.

Publishers are significantly more optimistic than agencies and brands about the extent of digital ad reductions in spend. Among the agencies and brands adjusting spend, which is at about 70%, digital display is seeing a 34% decline, with digital video at 32%; digital audio, 35%; social media, 28%; and paid search 25%.

Publishers are trying to work with agencies and brands to be flexible. Some 67% of news publishers say they are helping by pushing out campaign start dates, compared with 58% of non-news publishers.

Others are working with agencies and brands to create new messages, offering more value, lower rates, and creative services.

Cohen also believes many companies are saving their budget for the back half of the year.

“I think we’re going to see a thrust in the back half of this year causing an influx of activity the likes of which we have not seen in quite some time,” Cohen said. “It’s pent up demand.”

“The supply and demand dynamics will likely change significantly in the second half of the year, and as such it is not outlandish to think that prices will rise compared to Q1 and Q2,” he said.