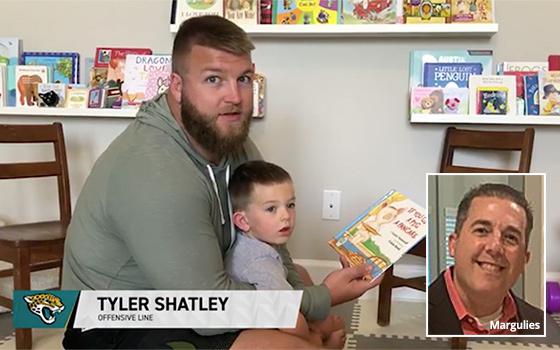 Even this early in the Covid-19 crisis, we have been hearing it again and again from marketers: It’s all about the content now. If your sheltered-in-place customers can’t buy from your brand for the time being, then you should inform and entertain them every way you can.

For the NFL’s Jacksonville Jaguars, this took a notably creative repurposing of an otherwise fearsome frontline, now as storybook readers for tykes. In fact, everyone from players to trainers to chefs have been enlisted in this online strategy of community service over digital channels.

As Director of Integrated Marketing Josh Margulies tells Brand Insider, sports teams have always been media companies of a sort. But this crisis flexes those muscles in novel directions -- into new categories of entertainment and even community information.

MP: We aren’t even in the NFL season, and the Jags’ marketing team made a radical pivot into being a robust media outlet.

Margulies: Our company has turned into a digital and social company. I've probably never worked more in my life than over the last two weeks because we're creating all kinds of new content, but we're doing it remotely. We created a ["904 Workouts”] series with our head trainer training his daughter with stuff that you would have in your backyard.

We have a cooking concept ["Easy Eats" ] with our head nutritionist. “Story Time With the Jaguars” has players reading kids’ books. We’re trying to create all this fun content because the fans want to have stuff to see right now.

MP: That is a lot of wholly new video programming set up in short order. Give me the tick-tock on how you guys engaged and encountered the current crisis in coming up with these programs.

Margulies: We were in the heart of our renewal period when we got sent home. We didn't feel comfortable at that point, pushing people for renewals, so we took a giant step back. We went from a sales organization to trying to be a positive in the community. Our owner donated a million dollars to Northeast Florida to help with COVID-19. We are purchasing 40,000 masks. We're going to distribute those to a lot of the frontline workers like people at the grocery store, take out, so that they're covered and being safe.

MP: Is this part of an overall strategic response?

Margulies: We've built a strategy around four pillars: educate, entertain, make our players relatable and make fans feel like they are part of our family. The goal was to do one of those four things with all the content that we put out. It focuses on how can we be a benefit or a help to the community. We have a bigger following than the City of Jacksonville. We put out a lot of Covid information, sharing what the city is providing on our website and through our social and our email.

We are putting out home workouts, because we want to be there to help inspire our fans. We're doing easy, healthy meals because all of a sudden people are having to cook 10 times more than they normally do and they have kids at home. How do they keep them healthy?

We're doing a story time with the Jaguars because we know that you're probably reading to your kids more than you ever had before. And sometimes it's nice to get a break and we're sending those reading books that were approved by the district. Those are getting uploaded to the district and the kids in school are getting access to the player reading to them. It's almost like having a player visit your home and read you a book.

MP: And done in video, by the way.

Margulies: We don't have a cameraman to go shoot this stuff. People are having to do it on their phone, so we've gotten a lot more low-fi. For the last four years, its been about how cool and how modern can you make it. We're almost taking a step back. It's not overly produced anymore. But it's really about getting the content into people's hands that they need right now.

Those are the things that we're really focused on, trying to be there for the community, trying not to bother them with sales messages. We want to make sure that they know that football will be there in the end. But right now, the most important thing to us is the fan and the community.

MP: Arguably, NFL teams are media outlets. But in this case you're becoming a much broader one. I'm wondering, are you seeing an expansion in your audience? Have you seen bumps in visitors or email subs, app downloads or anything that indicates that you're getting a wider reach because of this broadening of your content?

Margulies: We've always considered ourselves a media outlet. We're half news, half entertainment. We're moving at lightning speed, which is the news aspect of it, but I have seen an uptick in a few things. App downloads have gone up since this all started. Website visits have gone up, social followers have gone up at a more exponential rate than they typically do, and our content is being engaged with more than ever before because people have more time on their hands.

We've found that, across the league, there's more of a hunger for this than ever. So this acts as their escape and that's our goal, to give them as much entertainment and escapism as possible.

MP: Because you're part of this larger NFL and connected with one another, has there been a sharing of best practices? Are you giving each other ideas for how each team can serve their community?

Margulies: Yes, the NFL does a really good job of that. They put out a newsletter of best practices. It used to be weekly but since we started this it's almost daily. They'll scan the league and they'll see somebody did something cool and then they'll put links to it and they'll send that out to all the digital media producers. That's been really cool because it helps us. You don't have to reinvent the wheel. We're all trying to help our communities and so they're very open about sharing all this stuff.

MP: Have you started thinking about how we start resuming marketing as usual, how you start winding back up, back into sales messages or that sort of thing?

Margulies: We have, but more theoretically than in actuality because there is still so much unknown. But what we do know is that people aren't going to be made whole tomorrow. People losing paychecks and people losing jobs are not going to all of a sudden be back to where they were. So we're trying to make sure we're as sensitive and respectful of that in everything we do as possible.

The heavy sales messaging, you're probably not going to see this year. We're trying to come up with creative options that make it more affordable for you to go to a game or easier to pay it off over time. Or payment plans or three-year deals or things like that. We're trying to think creatively and outside the box of what that would look like. I don't think we have any answers yet. But yeah, we're playing those around in our mind all the time.

MP: Finally, have you already learned some lessons about marketing channels, about what's possible, about new things that you hadn't thought of that are good lessons coming out of this experience?

Margulies: From a lesson standpoint, the best one is the fact that you don't have to overproduce everything. Coming out of this, I think we'll probably do a little bit more of the low-fi work because people love the content and it's not so much the glitz and glam of it. It's the people. That would probably be one of the bigger takeaways.

People love football content. It doesn't matter what it is. It can be players reading bedtime stories or our trainer doing a workout with his daughter. People are watching it and they're consuming, they're eating it up and they enjoy it.