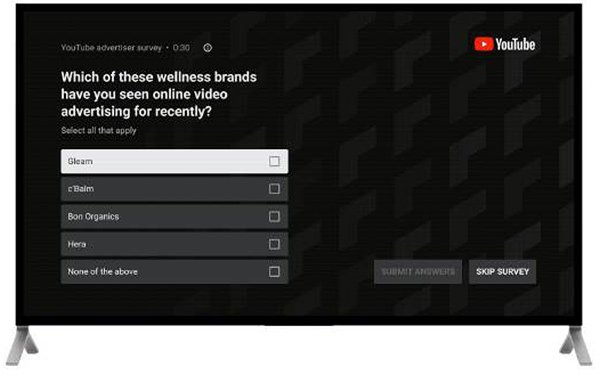 YouTube plans to begin sharing new advertiser insights and accelerating the launch of several tools, such as Brand Lift measurement for the TV screen, and flexible formats for TV screen content.

The COVID-19 pandemic has accelerated changes in viewing habits, and YouTube has accelerated the launch of Brand Lift for YouTube on TV screens to measure the impact of viewership on the platform.

For viewers, this means that surveys are now optimized for the big screen and interactivity with a TV remote, so people can easily respond or skip the survey.

For marketers, it means having the metrics to make better decisions about ad performance if they are using Google Ads or Display & Video 360 for reservation and auction campaigns whether focused on ad recall, purchase intent or awareness.

A major shift in streaming prompted the change as people spend more time at home.

YouTube internal data estimates the service has jumped 80% in watch time compared with the prior year.

The COVID-19 pandemic has moved live-streaming content on to YouTube -- content such as live concerts to live workouts from 24/Hour Fitness, to live line-dancing lessons and live news broadcasts with coverage of COVID-19 to cover issues such as rising meat prices and storm systems making their way through the Northeast.

Authors John Grisham and Stephen King recently used Zoom to post to YouTube. They promoted their latest books -- Camino Winds and If it Bleeds
-- respectively, but also raise money for the Bookseller Industry Charitable Foundation. The authors spoke about supporting small bookstores and their friendship. King also spoke about writing on a typewriter rather than a computer.

The watch time of news coverage on YouTube TV increased by more than 450% in the U.S. between March 11 and April 10, YoY.

Viewers are streaming the content not only on their computer screens, but on big-screen televisions. The watch time of live content on TV screens rose by more than 250% between March 11 and April 10, YoY, according to YouTube, while and episodic TV shows -- to buy or rent from YouTube -- grew more than 125%.

On TV screens, the watch time of feature-length movies available on the YouTube Movies hub, both AVOD and TVOD, grew over 800% YoY, and the watch time of shows on YouTube TV increased by more than 300%, during the same time frame.

YouTube said it also will increase format flexibility by introducing a skippable ad format for content that is casted onto the TV screen. As casting watch time soared by more than 75%, year over year, it will provide advertisers a way to reach their audience.