GroupM's Wieser On The Upside Of A Pandemic 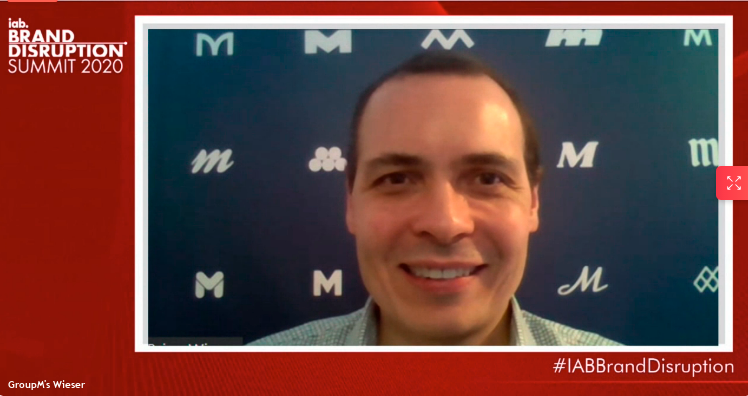 As disruptive as the COVID-19 pandemic has been to society, the economy, and most brand marketing categories in particular, GroupM Business Intelligence Global President Brian Wieser said there are some significant unintended benefits for the marketing industry -- forcing many brands to either accelerate the adoption of “slow-walking” programs already in place, or because it encouraged them to innovate new ways of doing business.

“As we went into the lockdown, it was really unclear how we would all adapt,” Wieser said during an afternoon keynote at today’s IAB Brand Disruption Summit, adding, “We all did, for the most part.”

Wieser -- who said a far more detailed view of how brand marketers adapted to change during the pandemic will be published in a soon-to-be-released new report from GroupM -- cited four cases where categories adapted new ways of doing business, including automotive, the movie industry, financial services and the restaurant business.

The automotive category may be most transformed, since the pandemic essentially accelerated a “direct-to-consumer” transition that never really existed for automakers before. While they did this out of necessity, because their dealerships were shut down, Wieser alluded this could lead to “some permanent changes.”

“Digital showrooming became a thing,” he said, adding that brands and consumers had no choice but to adapt to a virtual experience so that “brands could maintain a connection with the consumer.”

For the movie business, Wieser said, “It’s really hard to imagine theatrical-based businesses going back to where they were.”

He noted that the pandemic forced many studios to adapt more quickly than they otherwise might have to direct-to-consumer online distribution and/or subscription models.

As for financial services, Wieser said the big bank brands were trying to encourage consumers to adopt mobile apps prior to the pandemic, but once physical branches were closed, consumers had no choice but to transition to apps in order to manage their banking.

He said this was a boon for “traditional brand-based advertising,” because without physical branches, bank brands needed to advertise in order to “reinforce trust.”

And while the restaurant industry may have been the most severely impacted -- especially at a local level -- Wieser noted that the pandemic forced many franchisees to embrace things like digital ordering, digital takeout and delivery services that they had been “slow walking” previously.

“A pandemic has a way of concentrating minds,” Wieser said, noting, “These initiatives that the restaurant chains were trying to push quickly became adopted.”

Wieser noted that news of a vaccine breakthrough from Pfizer is “obviously very promising,” but implied that the economy -- especially for many brand categories -- won’t return to “normal” anytime in the near future.

“There’s still going to be scar tissue on the economy, because so many businesses have been impacted,” he concluded, adding that the pandemic will continue to put pressure on brand marketing categories to adapt and innovate new ways of doing business that otherwise might not happen.

“Chances like this won’t come around for a long time, probably not until the next financial downturn,” he said.