Survey: 46% Of SMBs Believe Recovery Will Start In June 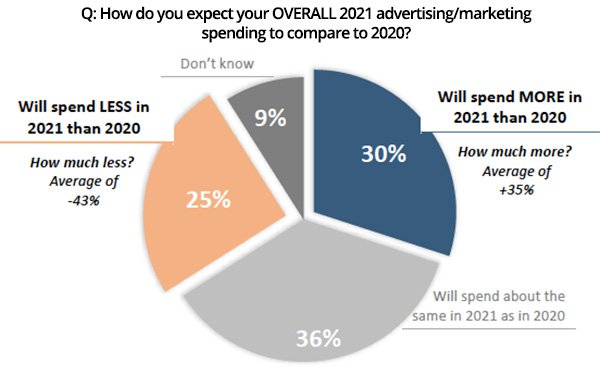 Compared with Borrell Associates' 2020 monthly surveys, more panelists from these small businesses participating in the December survey, fielded during the last two weeks in December 2020, expect conditions to worsen in the next six months before improving.

The end-of-year survey of small businesses, with 236 responses, asked participants about their advertising and marketing plans for 2021.

Adapting to the challenges of the COVID-19 pandemic has not occurred evenly for SMBs. Some 44% said they are adapting or thriving, while 43% said they are struggling or have been slow to adapt. About 12% said they have not needed to adapt, because they are “stable.”

Participants also were asked to describe their plans or budgets for advertising and marketing in 2021. Some 33% said they had already placed some buys for 2021, compared with 49% who did so a year ago for 2020.

Forty-five percent have already set their social media orders for the entire year, with 53% either placing or scheduling their social media for first-quarter 2021. Placements for print, broadcast, outdoor and other local media are less certain.

SMBs at 45% have either contracted or ordered their schedules from local media companies for first-quarter 2021, and 31% have done so for the full year.

When it comes to marketing partners, 45% are uncommitted. Responsiveness and communication, long-term relationships, and getting the best results are the top three factors that SMBs consider when choosing a partner.

When asked about the top reason why SMBs will stop doing business with a partner, 32% cited increasing the price by 20%, while 18% cited weak customer support, 14% cited weak marketing expertise, and 13% cited loss of targeting abilities.

Others cited lack of trust in their data, lack of product knowledge, the contract leaving the company, and product bias.