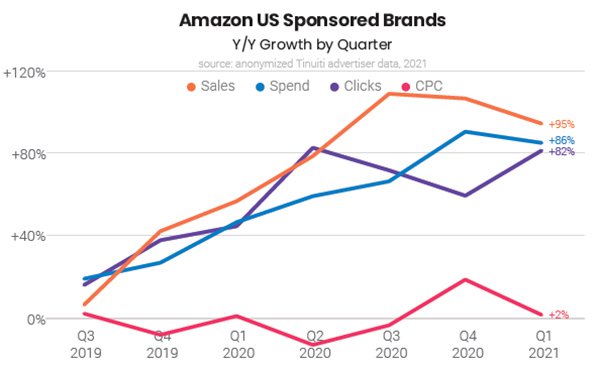 Amazon ad-spend growth remained strong in Q1 across all ad formats -- particularly in display formats available through the Amazon demand-side platform (DSP), as well as Sponsored Display in the Ad Console.

The amount advertisers spend on Sponsored Brands in Amazon to reach customers when they search for what to buy rose a whopping 86% year-over-year (YoY) in Q1, driven by an 82% increase in clicks and 2% increase in average cost-per-click (CPC).

Sponsored Brands Video remains a big part of the recent surge in Sponsored Brands growth during the past year, as the video format attracted many new advertisers with strong key performance indicators (KPIs), according to Tinuiti’s Amazon Ads Benchmark Report, released Thursday.

Tinuiti’s Amazon Ads Benchmark Report, based on anonymized performance data from Amazon programs managed by the company, aggregates data from the companies that it supports.

Search-based Sponsored Products impressions accounted for just 2% of all in the category, but these placements drove 32% of all clicks and 50% of all sales attributed to Sponsored Products in Q1. While placements on product pages and other search placements have much lower click-through rates and conversion rates than top of search, they are still valuable in producing incremental sales.

Several significant events caused a roller-coaster series of changes in advertiser performance, found in the data analyzed by digital marketing agency Tinuiti. These events include political events such as the January 6, U.S. Capitol riot and the winter storms in February that temporarily hurt demand.

Despite these events and hurdles, sales rebounded with help from stimulus checks in March that boosted demand for products and services.

Apparel ad impressions rose 54% YoY in March following a 13% drop a month prior due to stores reopening and mass vaccinations that have consumers shopping for products they weren’t as interested in a year ago.

The first quarter also revealed the habits consumers gained during the pandemic last year that will remain with consumers. The report points to online grocery, which saw a surge in demand as Americans sheltered in place and limited trips to brick-and-mortar grocery stores throughout 2020. Looking at YoY impressions, growth for grocery and gourmet food advertisers held steady into March.

The American Rescue Plan was signed on March 11, providing direct deposits to millions of Americans with a maximum of $1,400 per single adult, but many households didn’t receive deposits into their accounts until March 17, including those who are customers at major banks such as Wells Fargo and JPMorgan Chase, according to Tinuiti’s report.

Analyzing week-over-week growth, sales attributed to Sponsored Products rose 12% on March 17 and 8% on March 18 for the median advertiser, but quickly returned to normal.

Another interesting change Tinuiti noticed during Q1 this year was that the number of Walmart Sponsored Products advertisers more than doubled, compared with last year. Q1 2021 there were 125% more advertisers actively targeting Walmart Sponsored Products than in Q2 2020, as brands expanded efforts to try new retail media platforms during the pandemic and Walmart continued to ramp up its offering.

Walmart continued to ramp up its offering.