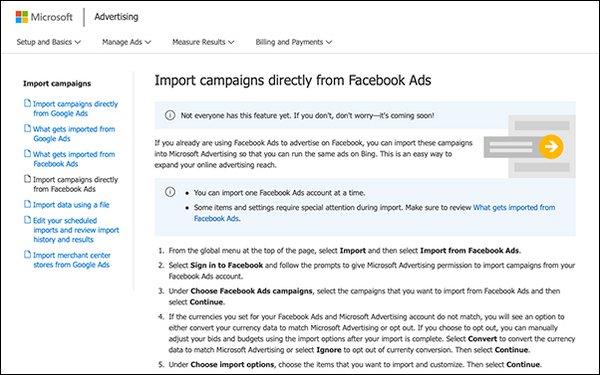 Facebook Import can be used as a stand-alone tool, as well as any existing Google Import strategy.

Advertisers can import from Facebook Audience into Microsoft Audience in three steps.

To begin, marketers can check the asset preview in the ad preview menu, review campaign parameters, and then launch the campaign by clicking the Import menu within the Microsoft Advertising account and select Import from Facebook Ads.

Permission will only be used to import ads and does not grant Microsoft Advertising the privilege to post on the user's behalf.

Marketers can select a campaign and click Continue. There will be an option to select new items, updates to existing campaigns that have already been imported, or both should be imported. Marketers also can customize imported campaigns’ bids and budgets if desired.

After the import runs, marketers will see a summary of what was imported from Facebook. To view the newly imported audience campaigns, select View imported campaigns.

This will complete the setup of Microsoft audience campaigns by importing from Facebook Ads, and new campaigns should begin serving after a brief editorial review.

A summary of what has been imported from Facebook into Microsoft Audience Network will serve up after.