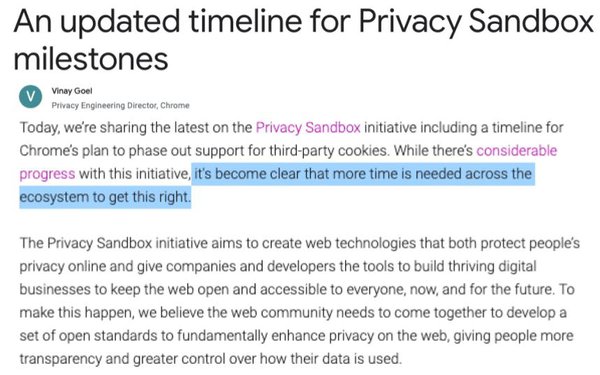 Google has extended its deadline to deprecate third-party cookies in its Chrome web browser until late 2023, from the original January 2022 date. The company is working on ways to replace third-party cookie tracking with Federated Learning of Cohorts (FLoC).

“While there’s considerable progress with this initiative, it's become clear that more time is needed across the ecosystem to get this right,” Vinay Goel, privacy engineering director of Chrome, wrote in a blog post.

Goel, in the post, calls on the industry to jointly develop a set of open standards that enhances privacy on the web, giving people more transparency and greater control over how their data is used.

To do this, he wrote, the industry must move “at a responsible pace” and allow sufficient time for public discussion.

"The delay of the end of third-party cookies have become a necessity," wrote Arnaud Creput, CEO of Smart, in an email to Search & Performance Marketing Daily. "Third-party cookies are still the main source of programmatic advertising revenue for publishers, but despite the industry's efforts to develop alternative solutions, they are not ready.”

He wrote that the premature disappearance of third-party cookies would have worsened the market imbalance to the benefit of Google and Facebook, and mentioned that the CMA in the U.K., and the European Commission have identified problems.

“Our industry must now take the bull by the horns and work collectively to implement viable alternatives, both in terms of new advertising opportunities such as contextual and respect of users' privacy," he wrote.

The move to Google’s Privacy Sandbox initiative represents a major change for the advertising industry, which likely will never return to the former ways of targeting ads. It aims to create web technologies that protect people’s privacy online and gives companies and developers tools to build digital businesses.

Google plans to continue to work with the web community to create more private approaches to key areas, including ad measurement, delivering relevant ads and content, and fraud detection.

Still, Google has met with resistance from Amazon and others in the way it plans to protect consumer privacy and target ads. Amazon blocks FLoC across its network of companies, along with web browser Brave and search engine DuckDuck Go.

At the time they wrote that it's "too premature to tell how big internet companies will work together to protect user privacy while working with advertisers to reach consumers."

They believe Amazon will ensure that advertisers understand the differences between addressable and unknown audiences, and how to best use the data, and model the targeting to create effective advertising campaigns.

Google Chrome and others have offered more than 30 proposals for change. Four are available in origin trials. For Chrome, specifically, Google plans to have key technologies deployed by late 2022 for the developer community to start adopting them.

The new timeline shows Chrome phasing out third-party cookies during a three-month period, starting in mid-2023 and ending in late 2023. This depends on Google’s engagement with the United Kingdom’s Competition and Markets Authority (CMA).

Each proposal goes through a multi-phased public development process, including extensive discussion and testing periods.

Discussions will be held about the technologies and their prototypes in forums like GitHub or W3C groups, and the technologies tested in Chrome through potentially numerous origin trials. Once the development process is complete, the successful technologies will launch in Chrome.

The two-stage plan to phase out support for third-party cookies in Chrome follows: