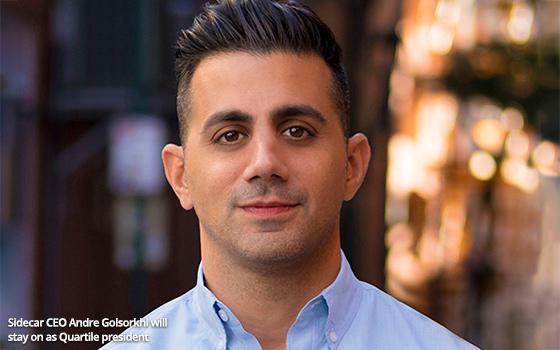 Quartile, an ad-optimization platform for ecommerce marketplace sellers, today announced it has acquired Sidecar, a performance-marketing technology provider for ecommerce retailers and brands.

“Sidecar represented a unique opportunity for us to add a large and comprehensive offering focused on direct-to-consumer ecommerce that complements our existing offering in the advertising marketplace,” says Daniel Knijnik, CEO of Quartile. “The Sidecar acquisition accelerates our roadmap in D2C, and brings a substantial customer and revenue footprint as well.”

All of Sidecar’s proprietary technology and IP is included in the deal. The two companies will combine under the Quartile brand, making the company the world’s largest cross-channel ecommerce advertising platform, according to both company executives.

Quartile expects the acquisition to double the amount of advertising spend it manages across all platforms to $2 billion in 2021. Unilever, Burt’s Bees and Thrasio are among the more than 5,000 brands using the platforms today on ecommerce channels Amazon, Google, Instacart, Walmart, Facebook and Shopify.

The combined company will have clients across 26 countries.

All Sidecar employees will join the combined company. Andre Golsorkhi, CEO and founder of Sidecar, takes the role of Quartile president.

The combined businesses will comprise a team of more than 300 personnel. Rockbridge Growth Equity, a Detroit-based private equity firm that originally invested a minority stake in Quartile in September of last year, will remain the lead institutional investor in the transaction.

When asked to cite the focus for 2022, Knijnik says it is “to develop the largest and most comprehensive suite of advertising management products for brands and sellers in ecommerce.”

Both Quartile and Sidecar have experienced growth in recent years as competition among ecommerce merchants has led to increased advertising spend.

Amazon is predicted to grow its ad revenue 55.5% to $24.47 billion by the end of 2021 -- closing the gap as the world's third-largest ad network after Google and Facebook, according to eMarketer.

Existing Sidecar shareholders will also own a significant stake of the post-acquisition Quartile entity. Investment Bank Canaccord Genuity served as the exclusive financial advisor to Quartile and Rockbridge in connection with the transaction.