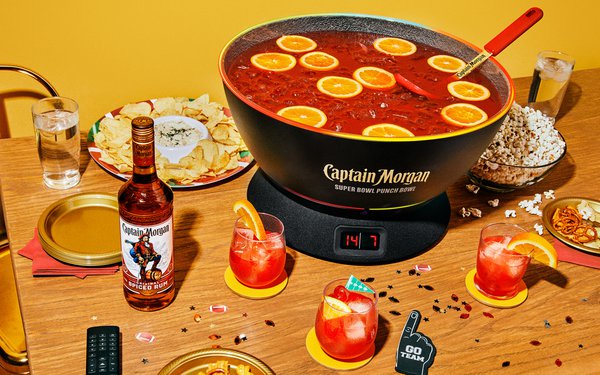 These miners, the brand said, would normally not be able to tune in to the Super Bowl due to "lack of access given their remote location."

Others who won’t be able to tune in to the Super Bowl (a recent Smirnoff poll found that 2% of NFL fans fit into the category) include essential workers in the Los Angeles area, where the game is being played this year.  So Davis, who won’t be going to Alaska himself, will instead make surprise Smirnoff “drops with all the fixings” on Super Bowl Sunday.

Smirnoff is also running a text-to-win sweepstakes, starting today, Feb. 2, through Feb. 6, in which 56 consumers (in honor of Super Bowl 56) will win 21 items each (in honor of its flagship Smirnoff No, 21) to throw their own Super watch parties.  The prizes include football-shaped stress reliever balls, foam fingers, chips and dips.

Consumers who really want to throw a super-sized party, though, might want to head over to another sweepstakes running through Feb. 6, this one from Diageo’s Captain Morgan, the NFL’s  first official spiced-rum sponsor.

The prize in this case is a branded punch bowl that measures over 18 inches in diameter, and holds four gallons of liquid to serve 32 guests.

Along with the bowl, said to be one of only 20 in existence, the winner will also get a branded ladle, designed by “Unnecessary Inventions” founder Matty Benedetto, cocktail glasses, stainless steel ice cube molds, confetti, non-alcoholic ingredients for included cocktail recipes, confetti and a $100 gift card.

Together, they’ll mark the 56th Super Bowl by gifting of Crown Royal’s new blend -- Crown Royal Aged 18 Years -- to 56 of the “most influential women” in sports, along with a gift of $1,000 in each recipient’s name to “a charity that supports young women in sports and their individual journeys.”

“Like Crown Royal 18,” the brand said, “each gift recipient is truly extra rare -- and we want to toast to their journey and contributions to the sports industry.”