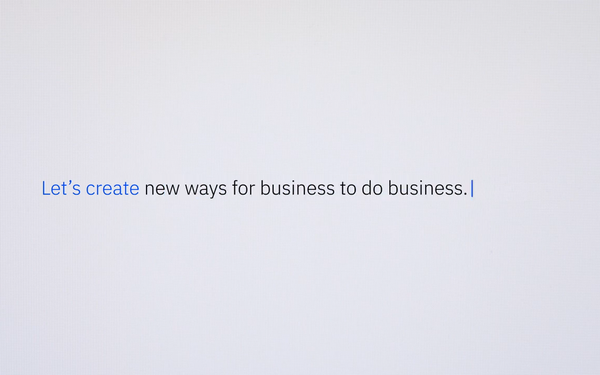 IBM’s most significant brand initiative for the 110-year-old company in more than a decade launched this week, putting the spotlight on creativity as a critical component in developing solutions to address the challenges facing businesses worldwide.

Developed with IBM’s global agency Ogilvy, the project signifies a new direction for IBM, including a departure from the company’s trademark blue letterbox in the TV spots. The new spots include the edit by design-based production studio, Imaginary Forces.

The campaign, Let’s Create, follows the November 2021 spin-off of Kyndryl, a managed infrastructure services business. On November 4, 2021, Kyndryl began trading on the New York Stock Exchange under the symbol “KD.”

Let’s Create focuses on collaboration between IBM and its partners using the company’s technology and consulting services, hybrid cloud and artificial intelligence (AI) technology. All data driven and to automate, modernize, secure, and transform organizations, according to Jonathan Adashek, senior vice president of marketing and communications at IBM.

The campaign rolls out in the coming months in three phases. The first will educate about IBM’s core capabilities and expertise. The second showcases how IBM helps clients bring their unique visions to life. The third chapter focuses on “New Creators,” and how to apply technology to create whatever businesses need.

The media buy for the campaign, which was developed in partnership with Mindshare, launched Wednesday with linear and connected TV, digital, out-of-home, paid social, IBM.com and IBM social channels. Geographies include the U.S, UK, Japan, Canada, Germany, France, Italy, India, China, Australia, Brazil, Spain and other markets around the world.

Frito-Lay and IBM worked together to build Snacks to You, an ecommerce solution using what the companies call “human-first design” built on Salesforce, to streamline the jobs of frontline employees.

In another example, Norway-based Yara a fertilizer company, co-created a project with IBM to build a digital farming platform based in the cloud and on data and security. It also focused on DataOps—automating data functions allowing its data scientists to focus on data models and innovation. It provides Yara with two data services—weather data and crop yield.