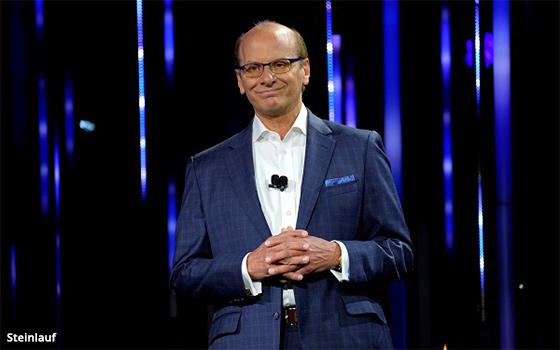 As other TV networks were revealing details on upfront deal-making and pricing, Chief U.S. Advertising Sales Officer of Warner Bros. Discovery Jon Steinlauf was much more muted at an investor conference on Wednesday.

“We are not going to talk about the market,” said Steinlauf, speaking at the Credit Suisse Communications conference. "This is not the time for that."

But he added some insight. “We are active; we are negotiating; we are talking to everybody; we are closing deals; we are being patient.”

Steinlauf said the efforts stem from building out the company's ‘Discovery Premiere’ package -- one that culls top TV shows for advertisers, which started in 2018.

"This is a process that requires more complexity,” he said. “The way we are going to market with 'Premiere' is not the way advertisers normally buy [program] mixes." He added that the package includes unusual content combinations -- sports, entertainment, lifestyle, news, and some syndicated TV shows.

"'Premiere' is positioned against broadcast network prime time,” he said. ”What the package looks like now is 30-40 shows. There was about $400 million invested in Discovery Premiere, pre-merger, by about 200 different brands.”

Now, Steinlauf said, the new version of Premiere is for a broader range of clients who want “great engagement, live viewing, higher ratings, and a competitive package to everything else that is out there but at a discount.”

Steinlauf did confirm what other senior TV sell-side executives have been seeing, marketwise, in near-term scatter TV advertising activity: “Automotive and tech has been hit the hardest because of chip shortages.” Still, he adds, the “supply chain has loosened up” some. For example, retailers like Target say their warehouses are overstocked.

In addition, he noted that travel and entertainment (movie studio) are categories that have improved greatly after COVID-19 pandemic disruptions. Consumer packaged goods marketers are a mixed bag.

With regard to linear TV viewing, Steinlauf noted that while narrower audience groups such as the 18-49 demographic have seen sharp declines of around 15% or more, broader groups such as viewers 18 years and older are doing comparatively well -- down just 5% or so. “That’s pretty good audience attention,” he said.

Near term, the company wants to analyze how its TV advertisers are looking at the light advertising loads on streaming -- typically four to five minutes on discovery+ and HBO Max. “Does the advertiser feel like the four- to five-minute load is much more impactful?” he asked.

The ability to target via programmatic platforms on streaming is a highly positive factor, he said, adding that currently, 50% of ad deals for discovery+ come through programmatic buying platforms from marketers.
On Tuesday at the same conference, NBCUniversal and Paramount Global executives said they are nearing the completion of their respective deal-making at high single-digit percentage CPM increases versus a year ago. Fox Corp. claims slightly better high single-digit/low double-digit price-hike results, and is also near to finishing upfront deals.