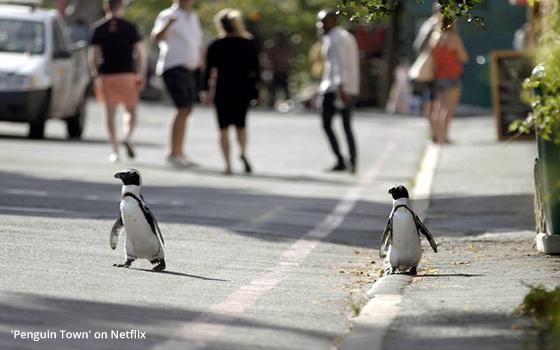 This year’s Daytime Emmys, airing Friday on CBS, are honoring a number of shows that are not technically daytime shows.

Streaming services and their shows -- which can be watched any time 24 hours a day, seven days a week -- are widely represented on the list of Daytime Emmy nominations this year, starting with Netflix.

Netflix ranks third, with 27 total nominations, on this year's list of nominated networks and other TV entities.

Only broadcast syndication with 48 total nominations, and CBS and ABC with 31 nominations apiece, garnered more nominations than Netflix.

The nominated Netflix shows include “Penguin Town,” about the lives of a group of South African penguins.

Narrated by Patton Oswalt, the show is nominated for six Daytime Emmys -- including Outstanding Travel, Adventure and Nature Program.

It is the most-nominated streaming show on the nominees’ list this year out of 94 nominated shows, tied with the syndicated “Drew Barrymore Show.”

The show will be co-hosted by Kevin Frazier and Nischelle Turner of “Entertainment Tonight,” a Paramount property that happens to be up for two Emmys -- Outstanding Entertainment News Series and Outstanding Promotional Announcement.

The syndicated “Entertainment Tonight” is the kind of show one expects to be nominated for Daytime Emmys.

It airs on broadcast television, which is where the preponderance of Daytime Emmy nominees has customarily come from.

Unlike the streaming nominees, it airs within the daytime time frame that has long been established and accepted by the TV industry -- basically from mid-morning to the onset of prime time at 8 p.m. Eastern.

Traditionally, the shows nominated for Daytime Emmys were always shows that aired within those hours. Thus, they are daytime shows.

Judging by the list of this year's nominees, the governing body of the Daytime Emmys -- the National Academy of Television Arts & Sciences (NATAS) -- has opened the doors of eligibility to categories of shows on the streaming services that are similar to the kinds of shows that have long come up for Daytime Emmys.

But the streaming shows are not limited to viewing in the daytime, nor are they beholden to linear TV schedules. Thus, they are not daytime shows.

They also run without commercials (although that is changing these days). That sets them farther apart from the kinds of shows that are traditionally nominated for Daytime Emmys.

On this basis, their inclusion in the Daytime Emmys would seem to fly in the face of an awards program with “Daytime” in its title.

Having said all that, it is important to point out that even as the streaming shows are making inroads, the Daytime Emmys continue to retain their old-school flavor, starting with their airing on the most traditional of networks, CBS.

This year's top nominees are all from the TV/broadcasting world. In addition to syndication, CBS and ABC, PBS and NBC ranked high with 23 nominations and 15 nominations, respectively.

The other soap, “The Bold and the Beautiful” on CBS, is ranked sixth on the nominated show list with eight nominations.

Rounding out the top shows, the syndicated “Kelly Clarkson Show” ranked fourth along with “The View” on ABC -- each with nine nominations.