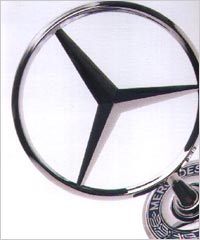 Mercedes-Benz is still topping out in the U.S. when it comes to how its dealers treat shoppers. The Montvale, N.J.-based automaker, which was in the top five of the J.D. Power & Associates dealership experience survey last year behind Lexus and Cadillac, takes the top position in the latest Pied Piper Prospect Satisfaction Index (PSI).

The PSI is a mystery shopper-based study that the firm conducted between July last year and June this year, using 4,419 hired anonymous people to shop at dealerships. Mercedes has been number one in the study for the past four years, based on a process that ties mystery shopping measurement and scoring to industry sales success. Acura, Infiniti and Lexus dealerships tied for second.

Mercedes-Benz dealerships led all brands in 10 of the 60 different sales activities measured by PSI, such as the salesperson introducing him or herself, providing a thorough test drive and focusing attention on three to five memorable features or benefits. Twenty-two different brands led at least one sales process category. Cadillac salespeople were, for example, the most likely to mention the availability of different financing options. Nissan salespeople were most likely to ask for the sale, and Toyota dealerships were most likely to give compelling reasons to buy from their specific dealership.

The study finds that overall auto industry performance improvement was widespread, with twenty-four of thirty-four auto brands improving PSI performance from 2011 to 2012. The firm said that 78% of the individual sales process factors improved. Auto salespeople were 11% more likely than in last year's study to address specific features or benefits relevant to the shopper, 8% more likely to mention the availability of different financing options, and 7% more likely to provide a walk-around demonstration.

Particular differences abound: Pied Piper says that salespeople at Subaru, Buick and Volkswagen dealerships were 50% more likely to offer a brochure to a shopper than were salespeople at Hyundai, Jeep or BMW dealerships; and Jaguar, Volvo and Infiniti salespeople were almost twice as likely to point out features that were unique from competitive vehicles when compared to Chrysler, Mitsubishi and Jeep salespeople.

“This year’s record high PSI results show that today’s dealership employees work harder than ever to be helpful to car shoppers,” said Fran O’Hagan, President and CEO of Pied Piper Management Company LLC. “A dealership’s success depends upon many factors that are very difficult for dealerships to change. In contrast, dealership sales effectiveness is simple to measure and simple to change.”

On average -- and not that surprising -- the top-performing auto brands as measured by PSI tend to be brands with higher average sales per dealership. Similarly, individual dealership improvement of sales effectiveness on average also accompanies gains in market share.