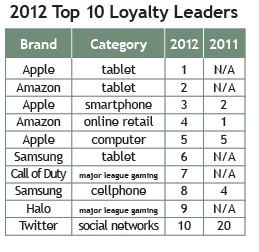 This year, the annual list of the 100 brands with the highest loyalty rankings was based on surveys of consumers who are customers of 598 brands spanning 83 categories.

Documenting the ascendance of tablets, 2012’s list is headed by #1 Apple, for its iPad tablets, and #2 Amazon, for its Kindle tablets. (Last year, Amazon was #1, but in the online retail category; while Apple was #2, but in the smartphone category.)

Apple’s iPhone smartphone and Mac computer brands also made 2012’s top 10, and Amazon also made the top 10 in the online retailing category. Samsung pulled two places in the top 10, for its Galaxy tablet and cell phone brands. Two gaming brands, Call of Duty and Halo -- plus social network Twitter -- round out the top 10.

2012 saw the largest number of new brands ever (21) to make the 16-year-old Loyalty Leaders List, and the common denominator for most of these is that they in some way facilitate social outreach and engagement, notes Brand Keys founder and president Robert Passikoff.

Moreover, 23% of this year’s top-100 brands are in the categories of tablets, cell phones, smartphones, computers, and cellular and social networks -- products and services that fulfill consumers’ “instant gratification” expectations for outreach and engagement, Passikoff points out.

“Brand loyalty has always been primarily driven by emotional engagement, and the rankings this year make it crystal-clear that connection is everything,” he stresses.

Looking at Apple’s superior overall rankings performance, Passikoff points out that Apple excels at delivering on the consumer expectation loyalty-drivers in each of its key categories. Specifically, in the tablet category, the drivers, in order of importance, are brand value (an innovative brand that consumers are proud to be seen with), followed by advanced design, features and hardware/software. In the smartphone category, the drivers are availability of apps, product design, brand value, and connectivity and ease of use. In the computer category, the drivers are innovative design, tech innovation, brand reputation/trouble-free performance, and support, warranty and pricing.

“Some brands suffered losses because of the economy, as consumers shifted to less expensive brands that still held some degree of meaning,” observes Passikoff. “Other shifts reflect the creation and adoption of new categories that better meet -- or exceed -- customer expectations.” He adds, however, that brands that understand that real emotional connections can trump added value are far less vulnerable to shifting economic trends, and to some degree, even shifting technological or functional trends.

Last year, beauty and personal care brands accounted for nearly a third of the top 100; this year, they represent just 18%. “The emotional engagement that women share with their favorite beauty brands can be very powerful, but consumers are looking harder for a reason to bond -- and buy -- one brand versus myriad ‘me-too’ products on store shelves,” sums up Passikoff.

The number of brick-and-mortar and online retailer brands in the top 100 is down by nearly a third versus 2011. “We believe that retailers’ inability to provide meaningful differentiation beyond pricing competition strategies has seriously eroded loyalty levels in the retail category,” says Passikoff.

The full top 100 Loyalty Leaders List can be obtained through the Brand Keys site.

The Loyalty Leaders analysis was conducted in September 2012 and includes assessments from 49,221 consumers ages 18 to 65, drawn from the nine U.S. Census Regions, self-selected for the categories in which they are consumers, and the brands for which they are customers. Seventy-five percent were interviewed by phone, 20% in face-to-face interviews, and the remaining consumers assessed categories and brands online.