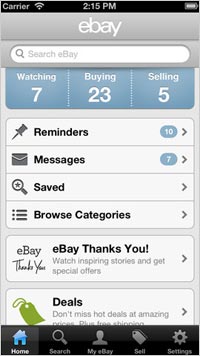 The report this week that eBay -- considered a leader in the mobile space -- will stop running ads in its applications doesn’t come as a ringing endorsement for mobile advertising.

Devin Wenig, eBay’s president of global marketplaces, told AllThingsD that the company next year will keep ads out of its apps next because they disrupt the user experience and don’t make much money. Based on a trial in its iPhone this year, he explained, ads cluttered up the screen and distracted users while generating little revenue for the company. “It’s not worth it,” said Wenig.

For eBay, of course, the main thrust of its mobile efforts is m-commerce -- and through its PayPal unit, mobile payments. The company projects it will reach almost $10 billion in mobile transaction volume this year (including PayPal), and earlier this month reported record levels of mobile shopping, with its biggest day ever on Dec. 9.

Given eBay’s overwhelming focus on m-commerce, analysts, developers and mobile ad executives said the company’s rejection of in-app ads wasn’t so surprising. “It says a lot more about eBay’s success with mobile commerce more than it says about mobile advertising,” said Noah Elkin, a principal analyst at eMarketer who covers mobile marketing.

He pointed out that eBay is one of the few companies that has the luxury of a large mobile revenue stream that doesn’t need to rely on advertising. “So rather than being the primary focus, it’s far down on the list for eBay,” said Elkin.

Jeff LaMarche, an iOS developer with more than 20 years programming experience, expressed a similar view. He pointed out, in particular, that while the main eBay app is free to download, the company is still charging for goods sold through it. “Having advertisements on top of another income model just feels, to many users, wrong,” he said. “So, unless the ads are generating an awful lot of additional revenue, it's often not just worth the bad press and angry customers that can result from having them.”

In addition to the clutter of banners on small mobile screens, there’s the challenge of accidental ad clicks when browsing a an app or mobile Web page. Google took a step to help address the so-called “fat finger” problem last week by confirming that a user actually meant to click an ad in an Android app before taking them to a landing page.

Despite the well-established challenges of putting display ads on mobile devices, Elkin pointed out that “native ad” formats like Sponsored Stories on Facebook and Promoted Tweets on Twitter are showing promise in their respective apps. “These ads are not necessarily as interruptive, which may contribute to their success,” noted Elkin.

In a forecast this week raising its outlook for U.S. mobile advertising in 2012 to $4 billion from $2.6 billion, eMarketer estimated Facebook would have the largest share of mobile display ad revenue at 18.5%. Twitter will be fourth, with 7.3%. The eMarketer report didn’t break out in-app ad revenue, but a Strategy Analytics forecast estimated the category would bring in $1.2 billion this year.

While eBay is all about m-commerce, it has made forays into mobile advertising, including its acquisition last year of location-based mobile ad network WHERE, now called the PayPal Media Network. In addition to the existing WHERE network, it gives advertisers the ability to target eBay online properties including eBay.com, Shopping.com, Bill Me Later and Red Laser, according to a GigaOm report.

A PayPal spokesperson on Thursday said eBay wasn’t using the PayPal Media Network to serve ads for the pilot ad project in its iPhone app. Still, not offering inventory in the eBay app would seem to lessen the appeal of advertising through the network for marketers. eBay said in September its app had been downloaded 100 million times over the prior four years.