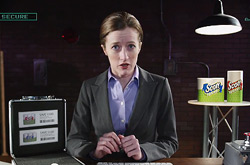 Kimberly-Clark’s Scott Naturals tissue is shifting strategies to expand the green product line from a niche brand to a mass market product for "mainstream green" consumers. The effort centers on a program to get people to do a "Secret Swap": change out your current bath tissue and paper towels with Scott Naturals products to see if your family will notice the difference.

A Web site, www.SecretSwap.com, touts the product line and details the program via a "Mission Impossible" style video in which a woman -- a secret agent type -- urges the viewer to accept the assignment to secretly switch and then report back to Scottbrand.com with the results. The campaign is fueled by a nationwide giveaway of some 2 million Scott Natural sample rolls via in-store shopper marketing initiatives, and CRM. There are also retailer specific coupons to incentivize purchase.

Alma Alejandro, Scott Naturals brand manager, tells Marketing Daily that the effort includes digital advertising to drive consumers to the Web site -- and that of the 2 million sampler giveaways, 1.2 million are via direct mail. "[The CRM element] is a very demographic and geographic approach centered on people living in a five-mile radius of distribution points, the rest were via hand-to-hand giveaways at stores." That, she says, includes the 1,752 Wal-Mart stores -- about half of the mega-store’s U.S. footprint -- where Scott Naturals are sold. The effort began on Earth Day.

"I think what we saw was a huge opportunity: we did focus groups last year and found we had been approaching it the wrong way [focusing on a niche buyer]. We found that the economic downturn inspired a back-to-basics attitude, including living more sustainably -- living a more sensible lifestyle. It's a change of mindset."

She says the company will have a leg up on the green competition because of the Scott Naturals price point. Environmentally friendly SKU’s tend to be more expensive than traditional products, and therefore remain a niche product for the ecologically energized. "People are very savvy; they look at 'sheet math' -- how many sheets they are getting for the price," she says. "We are not charging a premium per sheet [for Scott Naturals]. So you can go green without paying more."

The company is also doing a change in media strategy this year, away from traditional media -- particularly TV -- and more toward digital and experiential platforms. "More of the spend used to be TV, print, and free-standing inserts,” says Alejandro. “This year we challenged that thinking; we made a brave move and said 'no' to TV, and focused instead on trial offers and online.”

Per Alejandro, the brand has risen from a $4 million business in 2007 to $100 million in retail sales now, although that's still niche compared to billion-dollar retail revenue for the traditional lineup of paper products like Scott 1000.