Aww: Facebook Ads With Animal Images Get Most 'Likes' 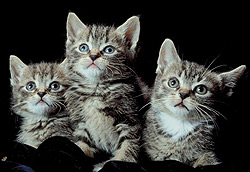 No wonder cat photos and videos are an Internet cliché. They work.

According to a new study of 3,000 images used in “Like Ads” on Facebook from 125 brands, those with beguiling images of animals had the highest response rate overall.

“It’s a bit of a gimmick,” acknowledged Addie Conner, CIO of SocialCode, one of a dozen strategic partners in Facebook’s Preferred Marketing Developer program, which conducted the research. She said the study was intended to give marketers “actionable” information about using images as the pressure to pump out quality content on Facebook keeps growing.

The social network has long advocated the use of images in ads as a best practice for marketers to increase the chances of engagement. The recent redesign of the news feed underscored Facebook’s emphasis on providing a more visually compelling experience. But that begs the question of what types of images work best in ads.

The Like Ads that SocialCode focused on in its study can appear in the news feed or in the right-hand column on a page, and are designed to help brands grow their fan bases. The ad format was chosen because it provided a consistent KPI (Key Performance Indicator) -- getting new fans -- across ads with different creative elements and different industry categories.

While ads featuring cute photos of cats, puppies or teddy bears may draw the highest response rates -- or Likes for a particular brand-page -- they don’t necessarily lead to the highest levels of engagement after the initial click on an ad’s Like button. “They’re not the best for downstream quality,” noted Conner.

When it comes to delivering longer-term engagement, ads featuring product images perform better because they are usually more directly related to a company’s core business. “If people are ‘Liking’ from a product, it usually indicates a deeper level of intent for the brand, and what we see is they engage a lot more after becoming a fan,” said Conner.

By contrast, Like Ads using logo images had the lowest post-Like interaction rate, although they were the most common type of image used in ads (34%), followed those with photos of people (31%) and products (25%). Logos or other general branding doesn’t deliver enough information about a marketer’s products or services.

Text-only ads, however, had the lowest response rate, which appears to support Facebook's advice on putting images in ads.

Looking at responses by gender, the study found women had the highest post-Like engagement rate on brand pages after responding to ads with images of landscapes or people, while men were more receptive to product images. Comparing generations, Baby Boomers and Gen-Xers likewise went for product images, while Millennials were pulled in by ads with pictures of people.

Differences also emerged among ad images across different industry verticals. For CPG marketers, ads using animal imagery outperformed all other creative types in both initial ad response and downstream engagement. Product images proved the most effective in the auto category, with 10 times the post-engagement rate of logo images and five times that of ads with people.