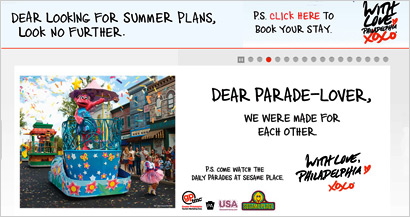 Anyone looking for a case study of how audience/prospect research and tailored, multichannel marketing efforts can pay off for destinations need look no further than Philadelphia.

The city had (and has) a longstanding convention and visitors’ bureau, and a city-run marketing arm. But in 1996, a separate, nonprofit organization (not a government or member-based agency) was created to focus on leisure tourism marketing: the Greater Philadelphia Tourism Marketing Corp. (GPTMC). The early- to mid-2000s also saw the creation of the (also non-governmentally run) Independence Visitor Center and Historic Philadelphia Inc. (an organization that runs a center and initiatives dedicated to bringing the nation’s history to life).

These organizations’ efforts have been combined with major civic investments to make Philly a more exciting destination, including redevelopment of the Independence Mall, development of The Avenue of the Arts, and the openings of the Kimmel Center for the Performing Arts and the Barnes Foundation (boasting one of the world’s premiere private art collections) in 2001 and 2012, respectively. (The Barnes is one of the city’s numerous, renowned museums.)

All of this has paid off big-time.

Since 1997, when GPTMC launched its first marketing efforts, Philadelphia and “the countryside” (which span Pennsylvania’s Philadelphia, Bucks, Chester, Delaware and Montgomery counties), have seen total visitation grow by 12 million or 45%. Overnight trips have grown 75% -- more than twice as fast as the region’s day trips, and about six times the national average growth rate. Overnight leisure trips have jumped by 80%, the fastest growth of any visitor segment, and downtown leisure hotel-room nights have grown by 228%.

In 2012, the region’s domestic visitors increased 2.1%, to 38.8 million, versus 2011’s 38 million. Twenty-nine percent of occupied center-city rooms were filled by individual leisure travelers, versus 14% in 1997. Downtown hotels had a Saturday-night occupancy rate of 85%.

All of this has translated to major economic benefits. Last year, travel to greater Philadelphia generated $27 million in economic impact every day ($9.75 billion for the year, an increase of 4.5% over 2011). It supported 88,761 jobs, with a $2.94 billion paycheck. And it generated $622 million in combined state and local taxes -- saving regional households $410 a year.

Started with a base budget of $4 million and four staff, GPTMC as of 2013 has a base budget of $11 million and 45 staff. Nearly three-quarters (71%) of last year’s funding came from hotel taxes, 14% from foundation grants, 1% from Commonwealth of Pennsylvania grants, and 14% from revenue streams developed by GPTMC, including partnerships, sponsorships and commissions.

GPTMC stretches those resources over an impressive scope of campaigns and initiatives.

From its start, the organization invested in consumer research to define its visitor/prospect base and the city’s brand/personality, says Meryl Levitz, GPTMC’s president and CEO. The marketing promise is “independence” --  derived from brand components including authenticity, accessibility, discovery, fun and history.

The campaigns based on this -- including Philly’s core “With Love, Philadelphia XOXO” campaign, created by agency Red Tettemer and launched in 2009 -- aim first and foremost to create a relationship between individuals and the destination, says Levitz. And research on consumers’ perceptions of Philly and the campaigns is ongoing.

Most recently, last fall, GPTMC worked with Destination Analysts to run focus groups with prospects from key Philly feeder markets. One exercise asked them to describe the city as if it were a human being. Whereas the same exercise done six years ago resulted in an “average, nondescript” perceived profile, this time around, Philly was perceived as “authentic and down-to-earth,” yet with “sophisticated, upscale offerings.”

Focus-group participants suggested that the “With Love” campaign add even more photography (which GPTMC is now doing), but they also confirmed the campaign’s effectiveness -- complementing GPTMC’s data showing that every dollar spent on the campaign yields $100 in visitor spending.

The “With Love” campaign sends “love notes” from the city, all headlined by the “Dear” salutation (e.g., “Dear Lovebirds”) via traditional media including TV, radio, print, transportation hubs, and billboards, as well as numerous digital channels, with messages targeted to visitor/prospect segments. (Various ads have targeted women looking for “girl weekends,” men looking for “mancations,” couples, the fashion-forward, specific geo areas like the Jersey Shore, and many more segments.)

“Gone are the days of one-size-fits-all marketing,” says Levitz. “Today, we use customized campaigns and many platforms to communicate with travelers where they are and in the ways they want to be reached.”

Two years ago, GPTMC created the Joint Marketing Program, through which corporations, organizations and attractions can buy into the “With Love” campaign. Since inception, it’s attracted 18 partners and generated more than $1 million in additional media-buying power.

Using the core concepts of love, fun and “being invited,” GPTMC has also created several other separate but consistent, segment-tailored campaigns.

These include campaigns targeted to Hispanics (Con Cariño, Philadelphia XOXO); to young African-Americans (Philly 360°, which spotlights the region’s burgeoning creative scene and historic legacy); to gays (the “With Love” logo accompanied by the copy: “Get your history straight and your nightlife gay”); to visual arts lovers (With Art Philadelphia); and a new Philadelphia Neighborhoods campaign that spotlights 14 of the visitor-ready areas surrounding the center city -- among others.

Online, Social and Other Efforts

VisitPhilly.com, the region’s official visitor’s site and the main hub or “call to action” to which campaigns drive potential visitors, drew 6.1 million visits per year, and ranks #1 among the destination sites of the 10 biggest U.S. cities.

Adding to its already-numerous resources, the site recently introduced a new hotel-booking search engine, BookDirect, which enables users to compare and shop for rates, but book reservations directly through their chosen hotel’s Web site.

In addition, GPTMC offers uwishunu.com, a timely “what’s happening” blog that is also a critical “call to action” for its marketing, and saw 2.62 million visits last year.

The organization also offers other, targeted sites or microsites, including a With Art Philadelphia site that won a Webby Award this year.

Two recent examples of its many social initiatives include a Visit Philly Guest Instagram Program in which professional photographers and seasoned Pinterest users documented each of the 14 neighborhoods featured in its Philadelphia Neighborhoods campaign; and a Visit Philly Guest Pinterest Program in which Jeanine Hays, the creative director and founder of AphroChic interior design company and blog, posted design-centric Philadelphia pins on the Visit Philly Pinterest account. (Home decor and design continue to be the most popular topics on the three-year-old Pinterest account.)

Beyond all of this, GPTMC engages in significant, ongoing media-relations efforts (including hosting journalists and taking the Philly story to them through road shows); hotel marketing (special packages/promotions it creates with hotel partners); and regional partnerships (working with museums, restaurants, civic organizations, conference an visitor bureaus and others that use their own resources to spread/reinforce the destination’s messages) -- among other programs.

Asked the keys to GPTMC’s success, Levitz stresses the research that enabled Philly to define its brand, and continues to enable strengthening that brand, through ongoing improvements in its campaigns and marketing channels. (Videos and photography have become more and more prevalent on all digital channels, for example.)

She also says that the organization’s priorities include staying updated on and having an in-depth understanding of all new attractions and events, and staying ahead of the technology curve.