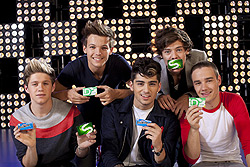 In two firsts for the company, Mondelez International is using a fan as a social media “correspondent”/brands ambassador to engage fans during the Nabisco-sponsored summer tour of the hot band One Direction -- as well as offering augmented-reality experiences on key snack-brands’ packaging.

The “1D VIP Tour Correspondent” (Kylie Keene of Portland, Maine) was selected through a contest that generated big buzz across 1D fan sites and social media communities. Hundreds of One Direction and Nabisco snack brands fans submitted videos and resumes to vie for the job.

Starting in June, Keene will be blogging on a newly created site, 1DVIP.com, as the Nabisco One Direction North American Tour makes stops in 35 U.S. cities – sharing a “fan’s-eye” view of sold-out shows through photos, interviews with concertgoers and other content. Giveaways will be offered through weekly updates.

Fans can download a mobile 1D VIP app from the Apple or Google Play stores and snap a photo of the package with a mobile device to unlock an exclusive experience featuring One Direction. Once the experience is opened, they can check back for new content, such as voice mails from One Direction and a cyber-photo booth where fans can create images of themselves with the band.

More than 40 retailers nationwide will feature One Direction-inspired custom in-store displays; 20,000 stores will engage in shopper-marketing activations as well as in-store media activations; and more than 15,000 stores will include 1D floor graphics and shopping-card advertising. FSI promotions will reach some 48 million consumers.

Nabisco is also running a sweepstakes, which can be entered through 1DVIP.com or specially marked boxes of the five snack brands, with prizes of VIP concert tickets.

During the shows, Nabisco will offer new videos and photo-booth opportunities, and distribute samples of the snacks as concertgoers exit.

Nabisco will be driving engagement for the tour’s various elements through extensive partnerships/media buys in digital and mobile channels favored by One Direction fans.

The various components will enable the Nabisco brands to engage millions of fans beyond those able to attend the shows, thus maximizing the tour sponsorship’s brand benefits, noted Stephen Chriss, senior director, U.S. media and consumer engagement at Mondelez International. Chriss reports that the One Direction tour campaign is one of the largest U.S. integrated programs launched by collective Mondelez brands in recent years.

One Direction – comprising band members Niall Horan, Zayn Malik, Liam Payne, Harry Styles and Louis Tomlinson – was discovered by Simon Cowell on the U.K.’s “The X Factor” in 2010. The band’s 2012 debut album, “Up All Night,” was the first by a U.K. band to enter the U.S. Billboard 200 chart at #1. Together with its second album, the band has sold more than 29 million records worldwide. Its current world tour is sold out.