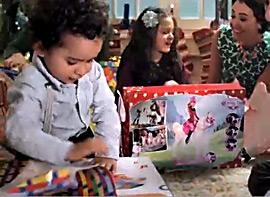 Just in time for the holidays, Mattel has introduced a first: A multi-brand, multiplatform Hispanic campaign aimed at Gen Y’s Latino parents. Themed “Toy Feliz,” the company says it’s an effort to create a “truly immersive” campaign for this growing audience. And observers say it’s evidence that marketers are rethinking the rules about engaging with a fast-growing demographic that parents (and shops) in its own special way.

Latinos are both more likely to be parents and more likely to be young parents than the general population, says Andy Hasselwander, VP/product development and professional services at The Latinum Network, which focuses on multicultural brands. And in many ways -- such as toy preferences -- there are few differences from others. (One exception is that less acculturated Hispanics tend to be more interested in traditional toys, making Barbie and other dolls a favorite.)

But these Millennials are more likely to be “fusionistas,” actively looking to blend their Hispanic cultural roots with their American reality. “When you look at parenting from an enrichment point of view,” he tells Marketing Daily, “they are doing things like ordering Spanish-language cable, even if they speak English, or combining both cultures in the way they cook.”

They are also likely to fuse holiday celebrations, particularly one as traditional as Christmas, explains Ida Chacon, Latinum’s VP/marketing. “You can even see it in the way they decorate, combining American things, like a tree and Santa with more religious items. And it’s evident in the more traditional ways they celebrate the 24th, the 25th and Three Kings Day.”

The Mattel campaign is running in Los Angeles, Houston and Miami, and includes TV and radio advertising on Univision, a partnership with Walmart, and a bilingual Web site. Unlike its previous Hispanic campaigns, this one touches multiple brands, including Barbie, Fisher-Price and Hot Wheels.

The Mattel campaign, which also includes print inserts and geo-coupons, also has a cause component, sponsoring holiday parties for PADRES Contra El Cáncer, a non-profit that supports bilingual health education to children with cancer and their families.