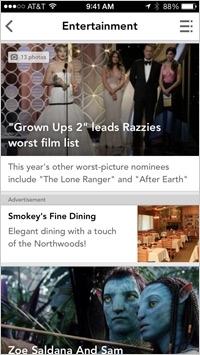 Most mobile apps simply don't generate a profit. Fledgling DoApp wants to change that. The company has created a self-serve mobile advertising network that serves text and images in a hybrid format resembling a cross between paid search and native ads.

Some 32% of SMBs report using some form of mobile advertising in 2013 to promote their business -- up from 28% in 2012, according to BIA/Kelsey's Local Commerce Monitor (LCM) survey.

DoApp supports about 1,500 apps for between 200 and 250 media outlets. Collectively, the mobile apps serve more than 500 million monthly mobile ad impressions through Adagogo, which operates on a revenue-share agreement with the news agency. The initial version of the self-service platform began rolling out in November, with continuous upgrades to the user interface and the back end.

Sriver, the first user-experience designer at Google leading design for many early projects, wants to keep processes simple. Brands sign into a Web site and add text, an image and location; and enter payment information. The ads serve until the amount of impressions purchased runs dry. Within the month, the platform will take on a subscription-based model, allowing marketers to update live ads and buy more impressions on the fly.

Marketers can run reports for individual publishers and news agencies that include third-party ad networks like AdMob, per Sriver, who also discussed plans to launch a software development kit (SDK) allowing other apps to integrate the network.