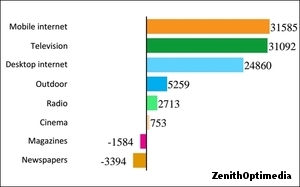 Ending one of the worst lags in the recorded history of global ad spending, the expansion of the advertising economy has returned to the pre-recessionary levels triggered by the financial crisis in 2007, according to estimates released early this morning by Publicis’ ZenithOptimedia Group.

In the latest installment of its quarterly ad economy forecast and tracking report, ZO now predicts the global ad economy will expand 5.5% this year, reaching $537 billion. The agency says that is an upward revision of 0.2 points from its last global ad forecast, which was released in December 2013.

“Advertisers are gaining in confidence as the world economy returns to stable growth,” ZO Worldwide CEO Steve King stated in the report, adding that while much of the expansion is being triggered by the acceleration of fast-growing digital media -- particularly mobile -- “television has lost none of its power to reach large and engaged audiences.”

The Internet remains the fastest-growing medium, expanding 16.2% in 2013 and forecast to grow an average of 16% annually through 2016, according to the agency’s revised forecast. While online display advertising (+21%) continues to be the fastest-growing subcategory within Internet advertising, due in large part to the rapid rise of social media ad spending (+29%) and programmatic buying, the agency noted that a blurring of lines between media platforms and formats is starting to occur as traditional media companies begin packaging digital inventory.

“Some broadcasters are starting to trade packages that include both online video and television spots,” the report notes, adding that online video remains one of the healthiest sub-segments in its own right, and is benefitting from the start of video-based programmatic exchanges, which is, “providing advertisers with more control and better value. We forecast online video to grow at 23% a year for the rest of our forecast period.”

Mobile advertising (by which we mean all internet ads delivered to smartphones and tablets, whether display, classified or search, and including in-app ads) has now truly taken off and is growing six times faster than desktop internet. We forecast mobile advertising to grow by an average of 50% a year between 2013 and 2016, driven by the rapid adoption of smartphones and tablets. By contrast we forecast desktop internet advertising to grow at an average of 8% a year.

Mobile, meanwhile, continues to be one of the fastest growing contributors to both digital and overall advertising spending, representing 12.9% of total Internet and 2.7% of all advertising in 2013, and picking up steam.

With mobile ad spending projected to grow at an annual rate of about 50%, the agency predicts it will “leapfrog radio, magazines and outdoor to become the world's fourth latest medium” by 2016.