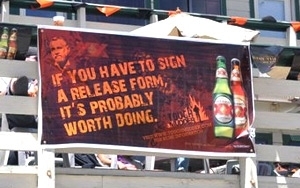 Dos Equis is joining an array of other sponsors for this year’s Tough Mudder competition season.

Tough Mudder, described by creators as “the world's most badass obstacle endurance challenge,” is kicking off the 2014 season with new partners and new obstacles.

This year, with more than 60 events across seven countries, Tough Mudder will reach more Mudders than ever before. Now in its fifth year, the competition has attracted over 1 million participants globally, says Will Dean, CEO and co-founder of Tough Mudder.

“Through their events nationwide, we’re able to reach hundreds of thousands of Dos Equis' most interesting and adventurous fans in a truly memorable way,” Thompson tells Marketing Daily. “Tough Mudder offers us a fresh chance to reach our core guy in an incredible environment that takes them out of their comfort zone, and into a space where they can overcome obstacles, be with friends and enjoy an experience they can’t wait to share.”

There are two key areas in the contest that Dos Equis is involved with.

“Our branded Electroshock obstacle is one of the most talked about highlights at any Tough Mudder event,” Thompson says. “Finally, every fan that finishes a Tough Mudder is met at the finish with a well-earned, ice cold Dos Equis to recognize their most interesting accomplishment. At the end of a 10- to 12-plus mile course, we know that our fans are truly earning that Dos Equis at the finish line."

The beer company hopes to stay involved with the contest in the years to come.

“You just can’t quantify the value that comes with connecting our fans and consumers with the experience they get at a Tough Mudder, and we look forward to raising a Dos Equis to Mudders everywhere for years to come,” Thompson says.