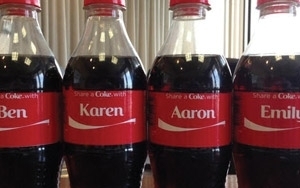 Coca-Cola is "personalizing" the labels on some of its bottles in the U.S. for the first time and launching a supporting integrated marketing push as it extends its international "Share a Coke" campaign.

Over the summer, the company will drop the Coca-Cola brand logo on some of its 20-ounce bottles. Individual bottles will instead bear one of the 250 most popular first names of U.S. teens and Millennials.

The idea is to reinforce young consumers' connection with the brand and encourage them to share Coke with friends and family. "We hope that 'Share a Coke' creates occasions between people this summer where they can simply enjoy the moment,” said Stuart Kronauge, SVP, Sparkling Brands, Coca-Cola North America.

In addition, the logos on 1.25-liter and 2-liter bottles of Coke, Diet Coke and Coke Zero will be replaced by group names like “Family” and “Friends”; 12-ounce cans will feature colloquial nicknames like “BFF,” “Star,” “Bestie,” “Legend,” “Grillmaster,” “Buddy” and “Wingman”; and eight-ounce glass bottles will bear the "Share a Coke" message.

Also, Coca-Cola Freestyle fountain dispensers will offer consumers who have the Freestyle app on their mobile phones the ability to scan a QR code on the dispenser’s home screen, follow the prompts and send a friend a coupon for a free 20-ounce Coke.

The U.S. "Share a Coke" campaign is being supported by national efforts that include a nine-week flight of new TV spots, cinema ads, social and digital engagement activities, interactive/digital billboards and a live tour.

Consumers who use the hashtag #ShareaCoke to share Coke-related stories and  photos will earn chances to be featured on Coca-Cola billboards across the country and a ShareaCoke.com gallery. Starting June 12, that campaign site will offer visitors the ability to create virtual personalized bottles and share them on Facebook, Tumblr, Twitter and Instagram.

The site will also list which first names are available on bottles in stores. For those whose names aren't featured on real bottles, Coke is launching a national tour, with 500 stops (listed on the site), where people will be able to get customized Coca-Cola mini cans (one for themselves and a second can for a friend or loved one).

In addition, My Coke Rewards members will be able to earn points and rewards for participating in various "Share a Coke" activities.

The Share a Coke campaign was launched in Australia in 2012 and has since been rolled out in Europe, the Middle East, Africa and South America.