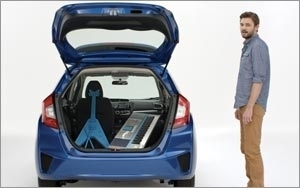 As we reported last week, Honda is pairing its new Honda Stage comprehensive music content program with a new ad campaign for the Fit compact car, featuring comedian Nick Thune. Under a “Fit For You” banner, the campaign touches all Millennial points of call: multicultural, social, digital, native content (yes, including BuzzFeed), and gaming.

The campaign, via agency of record RPA, puts the focus on the car's practical flexibility, pretty much a closer/non-starter for younger buyers who pretty much expect everything to be as functionally polymathic as their average smart phone. In the ads, Thune fields questions from a wild array of people with disparate auto needs: parents, cliff climbers, yoga types, a motivation-challenged cyclist, a band. The creative palette is cartoon-like with bicycles, the bicycle rider, musical instruments, bottles, yoga mats and other set pieces, in pastels. Except for the Stanley Cup, which makes an appearance. In each ad, Thune agrees to the task and spotlights the navigation system and its “swipe, pinch and zoom” functionality.

The ads also showcase the car's Magic Seatmultiple seating configurations, rearview camera (a palm reader asks him if the car can see into the future; he demonstrates the rear-view camera, explaining that, no, it can't see the future but it can see what's behind.)

There are two prongs on the multi-culti side. The African-American campaign featuring drummer Questlove, where he appears in a spot asking people “What’s your fit?” For the Hispanic market, there are Spanish and English language creative under #UnBuenFit (A Good Fit) looking to reach Millennials with a TV spot starring comedian Felipe Esparza and highlighting how the Fit fits the Hispanic Millennial zeitgeist.

The media footprint is wide, with network and cable buys, online video and ads (including mobile), and gaming. The TV campaign begins next week along with three 15-second online versions. Two additional TV spots will roll out in the coming weeks, per Honda. The digital kick-off was June 19 on iAds. Then come home-page takeovers on Yahoo and YouTube timed with primetime, cable TV and sports. There's a digital native marketing component to the campaign as well, with a Honda-branded “On The Road” video series on Thought Catalog, custom rich media units on Yelp and a Honda-owned channel on BuzzFeed.

Then there's integration in digital driving games, which has become pretty much de rigueur for Millennial car marketing strategy. The company has been running cross-promotional campaigns for Civic in a couple of games: Turn 10 Studio's “Forza Motorsport,” including a contest early this year to design a Forza Motorsports Civic, and involvement with Machinima's “Ultra Street Fighter IV,” including a live-action series “Street Fighter: Assassin’s Fist.” The new campaign puts Fit in scenes from Street Fighter, and includes a sweepstakes dangling a Fit, per the company.