As Advertisers Use DSPs To Buy Social, 'Reach Efficiency' Increases

It was 32% cheaper to buy ads on social channels in Q2 compared to Q1, per Neustar's Q2 2014 Media Intelligence Report, released today.

Neustar's report is based on over 220 billion digital ad impressions that took place over the course of Q2 as tracked by Aggregate Knowledge, the data management platform (DMP) that Neustar recently acquired.

As was the case with previous Neustar reports, social channels were the best for “reach efficiency” in Q2 (i.e., cost to reach desired audience). It’s 70% cheaper to reach your audience on social channels compared to the average, per the report.

“Social has gotten cheaper and more efficient over the quarters,” Rob Gatto, SVP of media and advertising at Neustar, said to Real-Time Daily. “It continues to be the king for reach … and cost.”  Neustar partially attributes this trend to the “rising popularity of DSP use for social,” which they say was first noticed in Q1 2014. 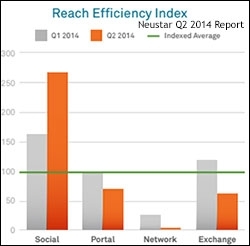 Exchanges are the most efficient channel when it comes to “user quality”-- which, in this report, means “people who you can reach more than once, and thus target consistently.” Exchanges were nearly twice as efficient compared to the index at consistently reaching the same consumer. (The index is the average of exchanges, networks, portals and social).

However, exchanges were 13% less efficient in Q2 than in Q1 when it came to “user quality,” which Neustar theorizes “may be related to marketers spending less on traditional exchanges in Q2.” GroupM’s stance against open exchanges comes to mind.

“It’s more important today than it ever has been to understand the audience and the channel and device,” said Gatto.

Gatto said the 220 billion impressions that Neustar’s AK tracked in the second quarter were on par with Q1, though he expects an uptick in Q3 and Q4. He says the data came from around 1,800 different advertisers' campaigns. The majority of these were large national advertisers, and the remainder were mid-sized players.