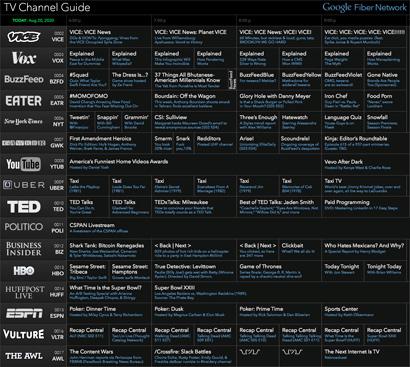 The drumbeat that thumps for OTT content services is loud enough to make you miss some of the bad notes that still plague streaming video services.

The Diffusion Group, in a new blog, mentions the one I think isn’t getting much attention: Even compared to that clunky cable remote, accessing online video is still harder than it has to be, and the selection process is blurry. That’s got to be fixed.

TDG’s Alan Wolk complains about this component of the so called user-interface  “or rather the complete lack of one. While going from app to app may work on your phone, it’s not a particularly expedient way to watch television. There’s no way to keep track of what shows are on what networks, no cloud-based universal program guide, watch list, or DVR." He says, "having to keep up with a dozen or so apps can prove to be quite a hassle. Add in the fact that not every app is available on every device….”

It isn’t. Not quite.

One great thing about TV is that choosing what to watch--physically at least-- is simple enough, and after Zenith’s Eugene Polley and Robert Adler perfected the remote control tuner in 1955 and consumers started buying it, changing channels became very simple. We began to click.TV Guide, and then newspapers, carried listings.

It was simple, as long as you were home. If not, you missed it. Some people (me) think television began to become a different thing altogether when it could be viewed at will, and collected.

But with media giants now buying into online content providers, Rex Sorgatz at the Website Medium.com imagined a “TV Channel Guide From the Future” that figures, if NBC Universal is going to pay $200 million for a slice of BuzzFeed or Vox, there’s got to be a TV-style content  model in its mind.

Hence, Rex’s spot-on TV schedule, with “channels” including, Eater, Uber (reruns of “Taxi”) and programs from Gawker like “Smarm” (Program highlight: “You look 15% nicer”); and the Vox, Politico, HuffPost, Vulture, Business Insider and Ted channels (“Gladwell for Advanced Beginners”). Check it out.

The program highlights are perfect, but sometimes truth is stranger than fiction and BuzzFeed is usually stranger than both. For $200 million, NBC Universal bought a piece of the site that today is featuring“Watch this girl pop a pimple that has been growing for six years.” Hey, It’s trending.
pj@mediapost.com
connected tv, online, online video, ott, television
Next story loading