Exponential Partners With Moat, Will Only Charge When Video Ads Deemed 'Viewable' 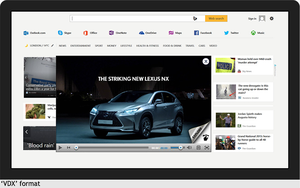 Digital ad tech firm Exponential Interactive, which is home to online ad network Tribal Fusion, is expected to announce Wednesday that it has partnered with Moat to measure viewability for its “VDX” video ad formats.

With Moat measuring the viewability of the video ad units, Exponential says it now “guarantees 100% viewability.”

“Viewability has become a top-of-mind issue for marketers as an ad that does not have an opportunity to be seen has very little value,” stated Jonah Goodhart, co-founder and CEO of Moat.

Moat is a Media Ratings Council (MRC) accredited viewability measurement vendor. The MRC calls for at least 50% of a video ad’s pixels to be in view for at least two continuous seconds to be considered viewable.

Exponential is offering the guarantee on video ads purchased on a “CPME” basis -- a mix between CPM and CPE (cost per engagement).