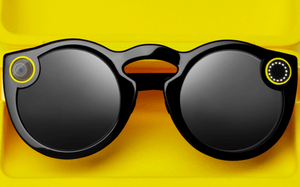 Showing off a more varied business model ahead of its IPO, Snap, Inc. just started selling its Spectacles for $129.99 a pop.

U.S. consumers can now buy the video-recording sunglasses at Spectacles.com. Until now, the stylish gadgets could only be acquired from a small number of physical vending machines.

The shades can record 10-second video snippets, which are designed to approximate one’s natural field of vision. That's thanks to a 115-degree lens, which records circular video.

To date, no company has been able to convince consumers to wear connected gadgets on their faces.

Google notoriously spent millions of dollars in development and marketing dollars before giving up on its Glass initiative. Yet Snap seems to have learned a few things from Google's failure.

Spectacles’ $130 price tag is far more reasonable than the $1,500 that Google tried to charge people for Glass. Snapchat's glasses are also being sold as a single-purpose device, which is historically much easier to market.

Tellingly, Snap is now calling itself a “camera company.” That's how the tech giant described itself in its recently released S-1 filing.

As analysts have noted, that’s likely because Snap no longer wants to rely solely on advertising for its financial well being.

“While the description may illustrate [Snap’s] intention to diversify more significantly away from advertising in the future, if the company does intend to [do so], it reinforces the early-stage nature of company at the present time,” Pivotal Research analyst Brian Wieser reasoned in a recent investor note.

As Snap recently revealed, advertising accounted for 96% of its revenue in 2016.

Among other reasons, Snap may be thinking bigger than ads because of their seasonal nature. In fact, it expects a “seasonal decline” in revenue in the first quarter of the year compared to the fourth quarter of 2016.

“Until we see the significance of the decline, it will be difficult to assess how meaningful this distinction is,” Wieser noted. Snapchat users are not growing at a “particularly robust pace,” he added.